Negotiators on nuclear issues from South Korea and North Korea are scheduled to attend a U.S. security conference later this week in New York, brightening prospects for the resumption of six-party talks, sources said. 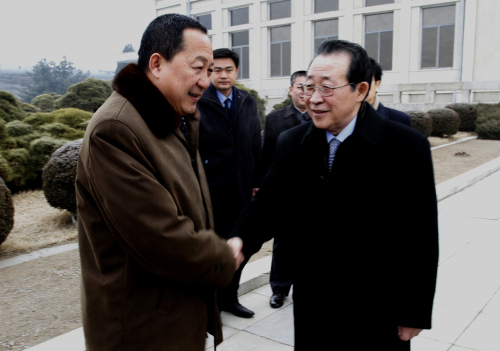 Ri Yong-ho, North Korea’s vice foreign minister and chief envoy to the six-party talks, is to attend the forum, held by Syracuse University from Wednesday to Friday, which South Korean nuclear envoy Lim Sung-nam will attend as an observer, the AP and other news reports said. The six-party talks involve South and North Korea, the U.S., China, Japan and Russia.

After the forum, Ri is likely to join a gathering on Saturday hosted by the National Committee on American Foreign Policy where Glyn Davies, U.S. special envoy on North Korea, or Clifford Hart, U.S. special envoy for the six-party talks, might be invited, Yonhap news agency said.

A series of opportunities for contact between the two Koreas and the U.S. through diverse unofficial channels in New York come as Washington and Pyongyang are meeting in Beijing on Wednesday to finalize follow-up arrangements for the latest U.S.-North food aid agreement struck last week.

The two sides had agreed that the North will implement a moratorium on long-range missile launches, nuclear tests and nuclear activities at Yongbyon and allow IAEA inspectors to verify the moratorium. The U.S. agreed that it will offer 240,000 tons of nutritional assistance for North Korean pregnant women and children.

In Beijing, the two are expected to further discuss timelines of the nuclear moratorium, an IAEA inspection and shipment of the food aid.

A South Korean government official said Seoul could open talks for the provision of light-water reactors to the North in line with the Sept. 19 joint statement adopted in the six-party talks in 2005, if North Korea returns to the non-proliferation treaty and the IAEA system.

The construction of light-water reactors in the Sinpo area in the North by an international consortium including South Korea was offered under a 1994 deal between the U.S. and the North in exchange for Pyongyang’s freeze of its nuclear activities. But the project fell apart amid the nuclear standoff in late 2002.

North Korea remains hostile both to the U.S. and South Korea.

At a rare news conference held at the National Defense Commission on Saturday, the commission’s spokesman said the U.S. should put an end to its military drills on the Korean Peninsula, should it want to resume the six-party talks.

“Talks and military exercises are contradictory. If it still demands dialogue, and hopes for peace and security on the Korean Peninsula, it should end invasion drills,” Maj. Gen. Kwak Chol-hui, deputy director of the National Defense Commission’s policy department, said at the news conference, aired on Korea Central TV on Saturday evening.

“Then, there will be progress in the six-party talks or any other sort of its kind,” he said.