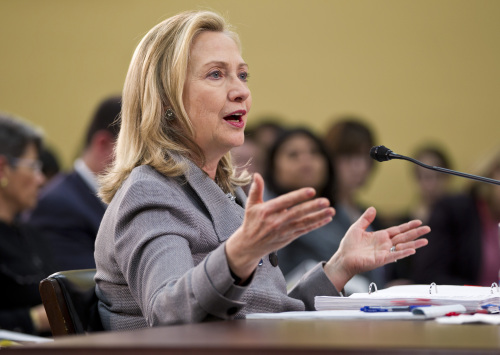 Secretary of State Hillary Rodham Clinton calls North Korea`s agreement to suspend nuclear activities and accept a moratorium on testing "a modest step" in the right direction, as she testified on Capitol Hill in Washington, Wednesday, before the House State, Foreign Operations, and Related Programs subcommittee. (AP-Yonhap News)
Challenges lie ahead as two have differences over content of agreement


The agreement between the U.S. and North Korea on temporarily halting the communist state’s uranium enrichment program in return for food aid was a positive step for the resumption of the multilateral denuclearization talks, experts here said Thursday.

But given its temporary nature and the possibility that the two sides struck the deal due in large part to domestic political needs, the agreement may not yield any significant breakthrough for Pyongyang’s actual denuclearization, they said.

Experts also pointed out that considering there appear to be some differences in the way the two interpret the agreement, challenges lie ahead in the process of fine-tuning details over its implementation.

In separate announcements that were made simultaneously on Wednesday, Washington and Pyongyang said that the North will temporarily halt its uranium enrichment program at its main nuclear complex in Yongbyon and put a moratorium on nuclear and long-range missile tests in exchange for food aid.

The North also agreed to the return of International Atomic Energy Agency inspectors who will monitor the moratorium on uranium enrichment.

For all this, Washington agreed to provide 240,000 tons of “nutritional assistance” to Pyongyang. The two will further discuss the “administrative details” in the immediate future, U.S. officials said.

The agreement came after high-level talks between them in Beijing last week.

Experts noted that both sides might have considered domestic political interests while reaching the agreement.

The North is now in desperate need of financial and political support from the U.S. to help consolidate its new head of state Kim Jong-un’s leadership and push ahead with upcoming major political events.

The North is to celebrate the centennial birthday of its founding father Kim Il-sung on April 15 and hold its ruling party’s meeting of representatives in mid-April, where Kim Jong-un is expected to be elevated to the party’s top post of general secretary.

It is also expected to convene a session of the Supreme People’s Assembly, the North’s rubber-stamp parliament, in early April where Jong-un is expected to be appointed chairman of the powerful National Defense Commission. On top of that, it is preparing to declare its entry into a “strong, prosperous state” this year.

“The cash-strapped North feels desperate as it prepares for all these events that need considerable financial resources,” said Lee Dae-woo, senior fellow at Sejong Institute.

“The U.S., for its part, needs to focus on the Middle East issue, namely Iran, and domestic political issues such as the presidential election in November. So it hopes things are stable on the Korean Peninsula.”

U.S. Secretary of State Hillary Clinton viewed the agreement as a positive step.

“Today’s announcement represents a modest first step in the right direction. We, of course, will be watching closely and judging North Korea’s new leaders by their actions,” she said during a congressional session.

Kim Young-soo, North Korea expert at Sogang University, said it can hardly be called a meaningful outcome, citing some conditions the two made for the deal.

“If you look at the agreement, it is a ‘temporary’ suspension rather than completely stopping, abandoning or scrapping it. Viewing it from a broader perspective, it is not a meaningful one,” he said.

Chin Hee-gwan, unification professor at Inje University, however, called the deal a considerable step toward the North’s denuclearization.

“The crux of the denuclearization efforts is to stop the uranium enrichment program and for the last two years, the efforts to denuclearize the North have stalled. In that regard, it is a meaningful change,” said Chin.

Although the two agreed to temporarily stop the uranium program, some analysts focused on the fact that the agreement does not specify whether the North should stop its plutonium-based activities as well.

With the atmosphere of dialogue being forged following the agreement, observers say that the six-party talks involving the two Koreas, the U.S., China, Japan and Russia may reopen as early as in the first half of this year. But some were skeptical about the outcome the six-way talks may bring about.

“The agreement has brightened the chances for the resumption of the talks. In the first half, there could be one or two six-party sessions,” said Kim of Sogang University.

“But for the North’s denuclearization, it takes a long time for the parties to get together, to make any decisions and then make good on whatever decisions from the talks. The resumption of the talks does not mean a resolution to the North’s nuclear issue.”

Despite the expectations for progress on denuclearization efforts, some hurdles appear to remain as the two sides apparently have different views on the agreement.

What is notable is the North stressed in its announcement that once the six-party talks resume, priority will be given to discussing the lifting of sanctions against it and provision of light water reactors.

But in its separate statement, the U.S. did not specify what will be discussed when the talks resumed.

The North also said that it would allow the atomic watchdog inspectors to monitor the moratorium on uranium enrichment while “productive dialogues continue.” The U.S. did not say about the condition.

Regarding food assistance, the U.S. stressed that it will be delivered “along with intensive monitoring,” but the North did not mention the monitoring issue.