While Luis T. Cruz said South Korea and the Philippines shared the common goal of “the rights and welfare of the workers,” he also called for further improvements to the law on Korea’s Employment Permit System. EPS allows Korean employers to hire temporary foreign workers for jobs they have not been able to fill locally.

Ambassador Cruz and diplomats from six other embassies this month thanked Korean lawmaker Kang Sung-chun for his work to ease the rules for foreigners wishing to be rehired after finishing contracts with companies here.

From this July, the revised EPS laws will allow migrant workers to return to Korea for new work after three months rather than the current six ― as long as they have met a series of conditions during their time here.

To qualify, they cannot have transferred jobs in Korea without justifiable cause ― and there must still be a labor shortage in the sector they were working in. They must also sign a new employment contract before coming back.

Returning workers will also no longer have to repeat the entry requirement of a Korean language test under the revision.

As of last year, Korea has employed more than 278,000 foreign workers from 15 countries including 24,000 from the Philippines under EPS ― accommodating more than 50 percent of the Filipinos in the country. They were employed in the manufacturing, construction, agriculture and fisheries sectors. But the Philippine Embassy has requested more jobs for its workers in manufacturing, as work in this sector tends to be less arduous than in the other fields.

Cruz also requested that the Korean government change its practice of calling those working past their visa expiry dates “illegal.”

Migrant workers’ length of stay is currently limited to 4 years and 10 months to avoid them reaching the five year mark that would qualify them for permanent residence status.

The Korean Immigration Service said there were 11,863 so-called “illegal” workers here as of December 2011, but Cruz asked for them to be termed “irregular” workers instead.

“The term ‘illegal’ is such a loaded word that connotes crime and even violence,” he said. “It minimizes the person and practically puts him or her in the same league as others who have committed arson, rape, murder or white collar crimes.” 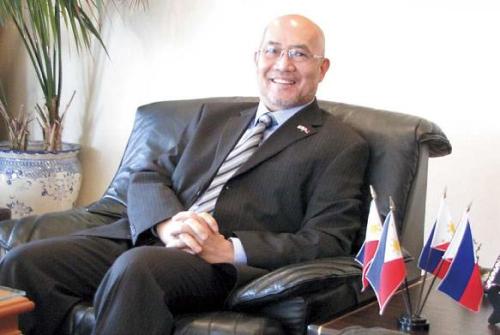 Philippine Ambassador Luis T. Cruz at his embassy on Friday (Kirsty Taylor/The Korea Herald)
He also called for amnesty for such workers.

“I humbly state my hope that at an opportune time the Korean government can also study the possibility of providing amnesty to overstaying workers and find a way for them to become eligible to apply to the EPS,” he said.

Another area for improvement that he noted would be for the government to raise the age limit for foreigners ― currently set at 38 ― arguing that workers above this age were still physically capable and could offer the added benefit of experience to their employers.

And he suggested that Korean firms be given more control over the length of contract they granted foreign staff, allowing them to go beyond the EPS stipulated time if they wished to.

“We are talking about giving the employer and the employee who have formed a bond the opportunity to let the working relationship flourish ― such bonds cannot be aptly captured or maximized by designations of age ceilings. Short-term employment visas that have to be periodically renewed can be used,” he said.

Complaints from Filipino workers had included delayed salaries, misrepresented contracts and physically or verbally abusive bosses or colleagues. But Cruz said that Korea was working to protect the rights and welfare of its foreign workers, adding “They want to come here because they can earn as much in manufacturing here as they could as a banker in their own country.”

He said that Filipino workers’ biggest challenges here were language barriers, weather and loneliness as the E-9 visa often does not allow them to bring their spouse or dependants with them to Korea.

However, Cruz also repeated the Korean Government’s request that migrant workers obey the law here and honor the terms of their contracts, calling the EPS “among the best government-to-government arrangements on labor that I have encountered.”

Korea’s seven-year old EPS won a U.N. public service award last year, and has been revised nine times since its inception. The Philippines was the first country to pilot the system in 2004. Now it opens up Korean jobs to migrants from 15 countries.

Today, there are more than 8 million Filipinos working abroad in about 180 destinations, who collectively sent home $24 billion last year.

The Philippine Embassy in Seoul offers training in areas such as personal financial management to help foreign workers make the most of their time here and plan for their return home and will hold its 17th annual Migrant Workers Day celebration in June. Well over 1,000 Filipino people attended the last event which took place on a floating stage in Yeouido Hanggang Park.