At the Global Korea 2010 forum, President Lee Myung-bak urged the country’s conglomerates to do more to carry out their increased social responsibilities and foreign experts also expressed their views on where capitalism, faced with greater challenges, should go.

“We need to abstain from unbridled jungle-like competition in the market and pursue shared growth through which everyone can live in fair abundance. Individuals’ creativity and freedom need to be protected while excessive concentration of power is kept in check,” Lee said.

Lee called on the family-oriented chaebol to play a bigger role by “pursuing shared growth in the industrial area, creating more jobs, and improving the quality of life for all.” 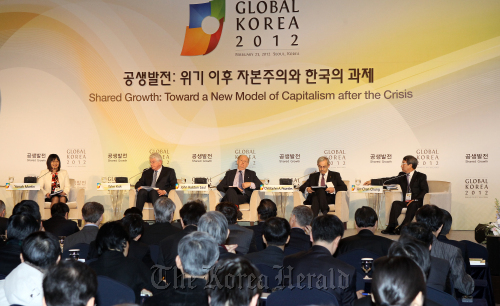 Panelists discuss capitalism and social responsibility at the Global Korea 2010 forum in Seoul on Thursday. (Yonhap News)
The forum came as the Lee administration stresses the importance of shared growth in a way that alleviates the widening gap between the rich and the poor, and helps out small and medium-sized firms in a country that has long been dominated by conglomerates.

Under the theme of “Shared Growth: Toward a New Model of Capitalism after the Crisis,” participants including a Nobel laureate sought possible ways to tackle the growing list of problems that are believed to be linked to the flaws of capitalism, characterized by the Wall Street Occupy movement and other related protests around the world.

During the opening debate session, renowned guest speakers scrutinized the concept and vision of shared growth. Wim Kok, former prime minister of the Netherlands, acknowledged there’s no ‘miracle solution’ but there is a need for a non-ideological approach bringing the market and the government closer in their joint efforts to pursue more inclusive and fair society.

PEN International president John Ralston Saul said the signs of a crisis popping up around the world demonstrates the current system is no functioning properly. What’s needed is a philosophical change, he said, particularly concerning the concept of growth in capitalism.

Nobel laureate and professor of London School of Economics Christopher Pissarides offered his positive response to Korea’s shift in focus toward shared growth.

“It’s very important that we should understand the process and implications of shifting balance toward shared growth,” he said, adding that the move means an effort to close the gap between the rich and the poor.

One particularly unsettling figures came from Chung Un-chan, one of the panels of the opening session. The former prime minister of Kore sand also chairman of the Commission on Shared Growth for Small Companies said corporate earnings increased 19 percent on the average 2005-2010, but household income grew just 1.6 percent during the same period, a gap that showcases the market’s indifference to social justice.

As for the welfare issue, Finance Minister Bahk Jae-wan said in a keynote speech for the luncheon that he is concerned about “excessive” welfare demand as populism-driven policies could pass burdens to future generations.

The forum, hosted by the Presidential Council for Future and Vision and the National Research Council for Economics, Humanities and Social Sciences, was organized by the state-run Korea Development Institute.