The picture shows real-life murderers and mafiosi from a high-security jail in Rome staging Shakespeare’s tragedy “Julius Caesar,” with their own personal dramas giving resonance to the play’s themes of betrayal and vengeance.

“We hope that when the film is released to the general public that cinemagoers will say to themselves or even those around them ... that even a prisoner with a dreadful sentence, even a life sentence, is and remains a human being,” Paolo Taviani, 80, said.

“Thanks to the sublime and simple words of Shakespeare, these prisoners for a few days came back to life. It was only a handful of days but they experienced passion and energy and I would like to dedicate this to them.”

His brother Vittorio, 82, read out the names of the inmates who took part in the film as he accepted the prize from the jury president, British director Mike Leigh, at a gala ceremony late Saturday.

The Jury Grand Prix runner-up prize went to “Just the Wind” by Bence Fliegauf, which was inspired by a spree of killings of Roma in Hungary in 2008 and 2009 in which six people died including a five-year-old boy. 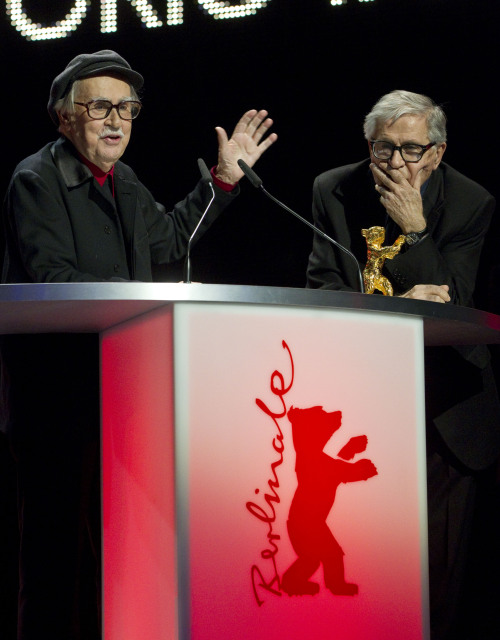 Directors Paolo Taviani (right) and Vittorio Taviani (left) react after receiving the Golden Bear for the Best Film during the Awarding Ceremony at the 62 edition of International Film Festival Berlinale, in Berlin Saturday. (AP-Yonhap News)
The film tells the story of Komona, a girl in a country strongly resembling DRC who is snatched from her village by armed rebels, forced to gun down her parents and made her commander’s mistress.

Mwanza was one of Kinshasa’s street children before director Kim Nguyen discovered her. She learned to read while working on the film.

“I had a very hard life and when I met Mr. Kim, I knew that for me it was a chance so that’s why I worked hard because I knew this work was going to give me something better in my life,” she told reporters.

The film, starring James Bond villain Mads Mikkelsen as the king’s personal physician who seduced his queen and with her plotted to bring Enlightenment reforms to the tiny state, also won best screenplay.

Germany’s Christian Petzold won best director for “Barbara,” a haunting drama about a woman plotting to escape communist East Germany which had been tipped to win at the first major European film festival of the year.

“Caesar Must Die” emerged as an early crowd pleaser among the 18 contenders.

It was the first Golden Bear for Italy since 1991 when “The House of Smiles” by Marco Ferreri claimed the prize.

The Tavianis, known for the socially engaged films they have been making for half a century, captured the Palme d’Or in Cannes in 1977 for “Padre Padrone,” which also used amateur actors, and the Jury Grand Prix for “The Night of the Shooting Stars” in 1982.

Last year, the harrowing Iranian family drama “A Separation” captured the Golden Bear and swept the acting prizes and is now nominated for two Oscars.

Its director Asghar Farhadi served on this year’s jury.

The Alfred Bauer Prize for a work of particular innovation went to the Portuguese melodrama “Tabu,” a two-part black-and-white melodrama set in contemporary Lisbon and colonial Africa about an illicit love affair.

And the jury gave a special Silver Bear to the Swiss drama “Sister” about a young boy who steals skis from a posh Alpine resort to support himself and his older sibling.