[ The Korea Herald – Send E-mail ]
Angelina Jolie says directing inspired her
By Korea Herald
Published : Feb 16, 2012 - 14:17
Updated : Feb 16, 2012 - 18:47
SARAJEVO, Bosnia-Herzegovina (AP) ― Angelina Jolie said Wednesday working as a director has rekindled her love for the film industry, even if it was something of a personal artistic rebellion.

Jolie told the Associated Press in Sarajevo that she was starting to feel “disheartened’’ and uninspired by her acting roles.

She knew she wanted to use film as a medium to deal with weighty matters, such as human rights abuses.

“We must remember to use this medium in a responsible way when we can,’’ she said.

Jolie had several roles in action movies, like the one in Mr. and Mrs. Smith but with her new film, she felt she was making a difference.

Her directing debut “In the Land of Blood and Honey’’ is about the horrors of the war in Bosnia. The film, which has already been released in the U.S., follows what happens when the man becomes an army officer and the woman is held in a military prison camp where rape occurs. 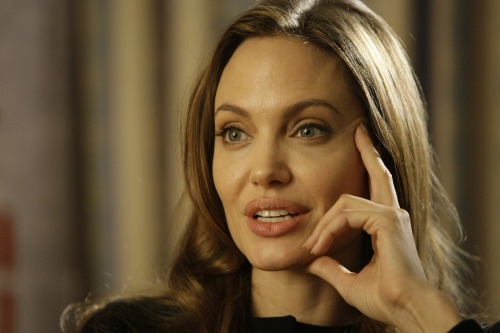 Angelina Jolie answers questions during an interview with Associated Press in Sarajevo on Wednesday. (AP-Yonhap News)
Jolie said she hopes it will inspire viewers worldwide to “speak up’’ and push for intervention in places such as Syria, where a government crackdown has killed thousands in the past year.

This is why it makes her happy when people watch the film, get “frustrated with the lack of intervention and they immediately say ‘Syria.’’’

“I wanted people across the world to watch this movie and say ...’ that is a family like mine, that is a mother like me. So when they see a headline that says a bomb went off in Aleppo they think of the characters in this film and they think they are related to them and they maybe feel that much more invested,’’ she said.

What was not done during Bosnia’s war, could be done now, Jolie believes. Her movie should raise awareness and make everybody who sees it “speak up’’ and “push ... to aid these civilians, they are in such a horrible situation,’’ she added.

“This film has taught me to love film again because I see what film can do and I see and I am re-inspired because I was not feeling very inspired as an actress. I was feeling very disheartened,’’ she said.

Asked whether it was her artistic rebellion against the perceived ignorance of the world toward crimes against humanity, Jolie said: “Yes! I suppose it is.’’

But it wasn’t easy.

Jolie said she was very nervous about showing Bosnians a movie about themselves and reminding them about the worst part of their history and have them listen to explosions again.

During the screening, “Brad and I sat together last night and he held my hand and I just took a deep breath and cried,’’ she said.