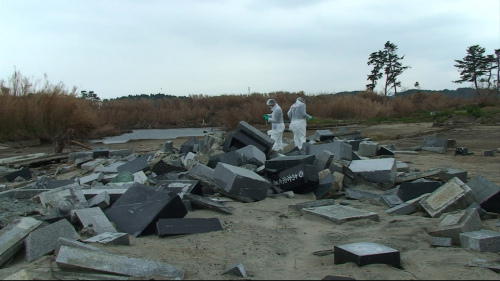 A scene from the documentary film, “Nuclear Nation,” by Japanese director Funahashi Atsushi, presented at the International Film Festival Berlinale in the Forum section. (AFP-Yonhap News)
BERLIN (AFP) ― The Fukushima nuclear disaster has come under the spotlight at Berlin’s film festival with three films exploring its impact on Japanese society less than a year on.

The 11-day festival, which prides itself on its generally edgier and more politically-overt line-up over other film showcases, was perhaps a fitting backdrop for the documentaries.

“I’m more than happy to be here because the Berlinale has got a long history of showing all those political, socially conscious films,” Atsushi Funahashi, director of “Nuclear Nation,” told AFP.

He said that although he was sensitised to the atomic question because his family had been affected by the 1945 Allied atomic bombing of Hiroshima, he was unsure at first how to tackle Fukushima.

“First of all, I didn’t know what to do as a film-maker but I knew I had to do something,” he said, adding one of his motives had been the difference in data from international and Japanese officials.

He focuses on the exile of residents of Futaba, where the crippled Fukushima Daiichi nuclear plant was based, to an abandoned high school 250 kilometers away.

The story homes in on a mayor whose town no longer exists as he tries to keep the community together.

“No Man’s Zone” by Toshi Fujiwara journeys inside a 20-kilometer area which was evacuated after the disaster, as well as surrounding areas, to talk to “normal” people about how their lives were affected.

With slow panoramic sweeps of battered buildings by the sea, thick piles of rubble, boats lying on their side and crumpled cars, the film opens saying that images of destruction are “always difficult to digest.”

It intersperses lingering shots of cherry blossom trees in the spring, cattle and green landscapes with frank conversations with farmers and fishermen who have lost their livelihood.

An older couple talk openly and animatedly about how they want to keep their damaged home despite the cost of repairing it and their experiences of having to stay in a refuge.

“I had a very strange feeling that the people who were directly concerned were somehow very neglected,” Fujiwara said.

Meanwhile, in “Friends After 3.11”, director Iwai Shunji discusses the political, social and economic state of the country with new “friends” that include a nuclear plant engineer, banker and journalists.

“I want to portray Japan’s present and future as told by these ‘friends,’” he said.

The disaster, triggered by the March 11 earthquake and tsunami, contaminated the environment and forced tens of thousands of residents around the Fukushima nuclear site in northeast Japan to evacuate their homes.

Many still do not know if or when they will be able to return.

The Fukushima power plant became the site of the worst nuclear accident since Chernobyl after it lost its cooling systems in the March earthquake and tsunami and went through meltdown and explosions.

In the wake of the Fukushima accident, Germany decided to phase out nuclear power by the end of 2022.