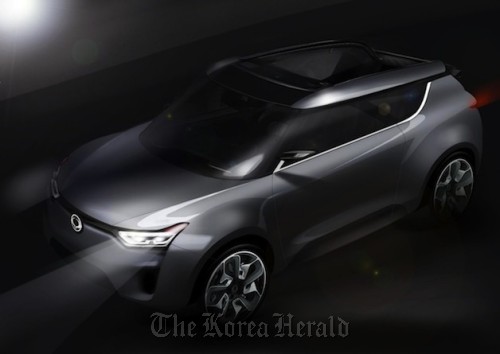 Ssangyong Motor unveiled its business strategy to expand its presence in the European market, saying that it will showcase the XIV-2 concept model at the Geneva International Motor Show in March.

The XIV-2, the concept vehicle as a premium crossover utility vehicle, is aimed at increasing sales in Europe, the company said in a statement.

Based on the hardtop XIV-1 concept from last year’s Frankfurt show, Ssangyong says the XIV-2 blends “the characteristics of a robust and powerful SUV with the dynamic style of an open top sports coupe.”

Last year, SsangYong announced its plans to put a compact SUV based on the XIV-1 into production. It describes the new XIV-2 concept as a strategic model for the global market.

Ssangyong says the XIV-2 concept will be equipped with Euro VI-compliant 1.6-liter petrol and diesel engines that are fuel efficient and eco-friendly.

Expect more images and details of the SsangYong XIV-2 concept to be revealed at the 82nd Geneva motor show on March 6.