Bucharest is studded with nearly 300 exquisite churches, some dating to the 1500s. During Communist times, Nicolae Ceausescu tore some of them down, and he hid others inside mammoth apartment blocks, but Romania has always been a religious country and even he knew he couldn’t obliterate them.

My plan was to find St. Nicholas, a Russian Orthodox church with seven onion domes, which I had happened upon a few nights before in the rain. I had peered inside and watched a dark-clad figure light candles and was captivated by the gold and icons and extravagant, over-the-top beauty.

The last time I was inside an Orthodox church was in Russia, 20 years before. Old women in headscarves knelt, crossing themselves and kissing every icon within reach. The doors of the iconostasis swung open and the priest sailed out, gorgeous in tall hat and robes, swinging his incense shaker and followed by a cloud of sweet smoke and chanting boys.

When a friend asked if I wanted to go to Bucharest, my reply was flippant. “Sure. Will I have to learn Hungarian?”

“That would be odd,” came her dry response, “since they speak Romanian.”

Bucharest, Budapest ― I knew nothing about either. Exploring Bucharest, though, turned out to be a fascinating trek through a city of contrasts ― ancient churches next to crumbling Communist-era flats; deserted storefronts with broken windows next to vibrant cafes; sophisticated hipsters texting on iPhones and sharing the sidewalk with packs of feral dogs.

In the past few weeks, University Square in Bucharest’s city center has been disrupted by demonstrations against the president and the government. But on this Sunday in November, all was peaceful.

Now a member of the E.U., Romania is on the Black Sea, tucked between Hungary and Ukraine. It spent 34 years as a reluctant member of the Warsaw Pact, but it has always looked to the West ― especially to France ― rather than the East. Its language is similar to French and Italian.

Bucharest’s many parks, wide boulevards and broad sidewalks are reminiscent of Paris. Its architecture is a glorious jumble of Baroque, Byzantine, neo-classical, Art Deco, traditional Romanian and Communist hideous.

Officially, the population is 2 million, but the actual number is probably closer to 4 million because of unregistered residents who have moved here for jobs and school. 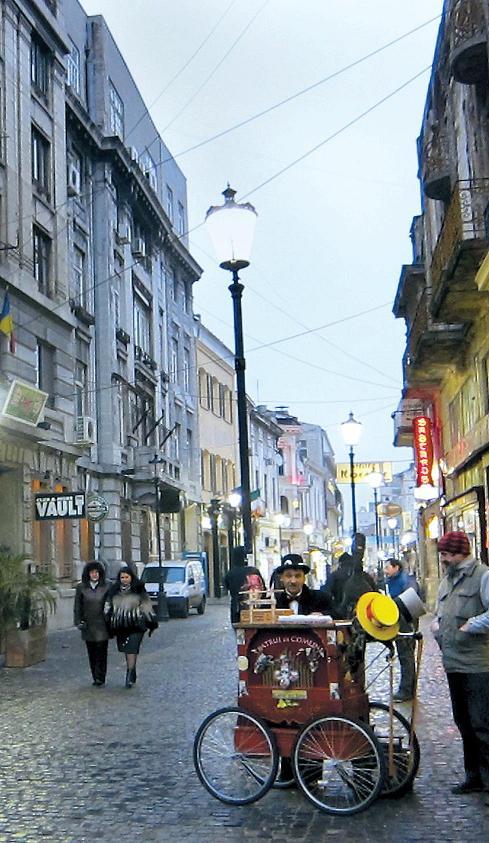 A gypsy fortune teller in the Old City of Bucharest. (Laurie Hertzel/Minneapolis Star Tribune/MCT)
At one time, Bucharest was known as “Little Paris,” and as I walked the streets of the city center I could see the French influence in ornate buildings adorned with scrolls, cupids and marble pillars.

At the end of Kiseleff Boulevard stood a little Arc de Triomphe ― quite like the one in Paris, but only about half its size.

The singing led me to St. Basil the Great Church, a tidy white building with gold trim and a bell-shaped gate. A carved wooden troitsa (traditional Romanian cross) stood in the front garden, across from a small, roofed structure glowing with burning candles ― one end marked for the living, the other for the dead.

I pulled my scarf over my hair and climbed the church steps. Inside, it was much as I remembered from 20 years ago ― every inch of wall space devoted to icons, some painted, some pounded out of silver or gold. The vaulted ceiling was covered in murals, and overhead a blazing chandelier dripped with crystal beads, icons and golden-winged birds.

The nave was packed, and I stood shoulder to shoulder with worshipers, listening to the priest sing the liturgy. A woman knelt and closed her eyes. I was suddenly seized with the uncomfortable voyeurism of a tourist and tiptoed back out the door.

But as I walked down Calea Victoriei (Victory Street), I heard singing again and again; there were five old churches along this stretch, and at each one, the haunting sound and beautiful architecture pulled me in.

In Bucharest, wild dogs were everywhere ― sleeping in doorways; trotting along sidewalks; pawing through garbage. Every night, I heard fierce barking outside my hotel.

They looked like ordinary dogs, though scruffy and skittish, but each year about 6,000 people are bitten, and in the past five years two people have been killed.

The government has launched programs to deal with the dogs, including neutering them and euthanizing them, but none has proved successful. The problem began when Ceausescu seized houses and demolished entire neighborhoods for his massive projects. Families were forced into blocks of flats, and many set their pets free. The abandoned animals bred, and bred again, and now an estimated 50,000 feral dogs roam the city.

Ceausescu’s execution on Christmas Day 1989 marked the end of 45 years of communism, but Romania’s problems did not end with his death. The dogs are one challenge. Another is unclaimed property _ houses and commercial buildings that were nationalized long ago. Now, streets of bright new businesses and high-end shops are interspersed with abandoned buildings and weedy lots. In most cases, ownership is either unknown or snarled in bureaucratic red tape. Entrepreneurs are reluctant to begin renovation, lest owners reappear, and so a sort of paralysis has gripped the city.

“Bucharest feels like a place on the verge of coming alive,” I told one of my Romanian friends as we sipped drinks one evening.

At the edge of the Old City on Sunday morning, Revolution Square was nearly deserted. It is fronted by buildings of great architectural beauty: the 18th-century White Church, the ornate Romanian Athenaeum opera house, and the National Museum of Art (formerly the Royal Palace), where I happily squandered an hour looking at portraits of serious women with thick black eyebrows, and men with fabulous hats.

At one end of the square loomed the former headquarters of the Communist Party, where, on Dec. 21, 1989, Ceausescu, in fur hat and overcoat, addressed the enormous, jeering crowd that he only gradually realized had turned hostile. The old dictator fled, but he was captured and executed four days later.

From that amazing place ― the very spot where revolution began ― it was just a few steps to the heart of Medieval Bucharest. The Old City is where Bucur the Shepherd built a church in the 1300s, establishing the city, and where Vlad the Impaler had his palace in the 1400s. (Bucur’s church no longer exists, but Vlad’s palace remains.)

In the Middle Ages, this was the center of commerce, its winding cobblestone streets named for tradesmen: furriers, shoemakers, hatters, goldsmiths and blacksmiths.

This is where you’ll find Bucharest’s oldest church, the Old Court Church, built in 1559, and its oldest inn, Manuc’s, built in 1808 (and still a hotel). Merchants from the countryside slept there before market day, parking their carts in the cobbled courtyard.

The Old City today is an odd and wonderful mix of new and old ― one block deserted, the next block lively with bright cafes and galleries. All the length of Lipscani Street stood blue tents, where artists sold jewelry, scarves, candy and furs. A gypsy fortuneteller, a live parrot perched on his bowler hat, cranked out a tune on a barrel organ.

A food vendor in a knitted cap made kurtos colac (chimney cake), a Transylvania specialty. He wound thin strips of dough around a wooden cylinder which he rolled over hot coals, then rolled the hot bread in cinnamon and crushed nuts. Oh, gosh, it smelled good. But by then I was out of money.

I had squandered my last few lei at a food cart with a sign that said, as near as I could tell, “chili sandwich.” I felt recklessly adventurous handing over my money, but the mysterious chili sandwich turned out to be nothing more than a hot dog.

Late in the day, on my way back to my hotel, I got briefly lost, turned a corner, turned another corner, and there it was ― St. Nicholas! I peered through the iron fence at its massive arched front door and gleaming domes. The service was over, but I had already been to church _ again and again _ and there was no longer any need to go inside.