[ The Korea Herald – Send E-mail ]
KT plans to limit smart TV’s access to Internet from Friday
By Korea Herald
Published : Feb 9, 2012 - 20:10
Updated : Feb 9, 2012 - 20:10
KT Corp., the nation’s largest fixed-line operator, said Thursday that it would limit the Internet access of smart TVs from Friday, urging TV makers like Samsung and LG to pay the costs for network use.

“If the fast adoption of smart TVs continues, there is also possibility of network blackout,” the official said, calling the network use of smart TVs “free riding.” 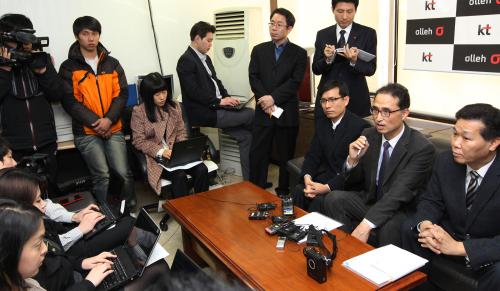 Kim Hyo-sil (second from right), executive vice president of KT’s smart network policy task force, speaks during a news conference at the company’s press room in Gwanghwamun, central Seoul, on Thursday. (Yonhap News)
Following the announcement, smart TV customers who also subscribe to KT’s high-speed Internet services will be barred from using the Internet via their TV’s Web browser as well as services like video-on-demand and games starting Friday.

KT said, however, it will implement the measure first on TV sets made by Samsung Electronics as the world’s largest TV maker has shown little interest in sharing the network costs, while its talks with LG resumed just recently.

According to KT, if smart TVs dominate the network, the data speed of other Internet users could get 265 times slower to the extent that Web surfing is almost impossible.

In a report published last year, KT predicted that the number of smart TVs could more than triple by 2013 and the nation’s data traffic could increase about four times overall.

Currently, sales of smart TVs are estimated at about 1 million units in Korea.

The nation’s telecom companies KT, SK Broadband and LG Uplus have tried to engage TV makers into related discussions over the past year, but no progress has been made.

“In order to solve the fundamental issues, TV makers should pay the proper costs for their network use like other Internet-based telephony operators and IPTV providers,” said the KT official.

SK and LG also said on Thursday that they were considering their own measures, including limiting Internet access.

“KT’s decision goes against the principle of network neutrality, under which consumers can use services without discrimination. Moreover, we need to verify whether smart TVs actually cause excessive data traffic,” Samsung said in a statement.

Meantime, the Korea Communications Commission warned that it will consider regulatory actions if any consumer damages are unfairly caused by the disputes among businesses.