“What local critics consider as an exceptional piece of literary work here may not be regarded the same way overseas,” Kim Seong-kon told The Korea Herald in his office in Samseong-dong, Seoul, Wednesday. “Each and every foreign country has different tastes and interests. I’d like to interact with literary critics and publishers overseas more often, and take their opinions into account. We’d like to be more ‘foreigner-friendly.’” 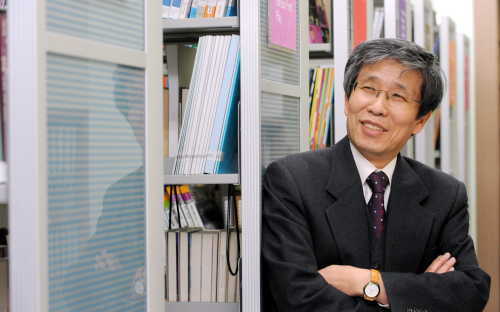 Even before becoming the director, Kim has been a long-time advisor to KLTI. Most recently, he participated in the institute’s joint project with American publisher Dalkey Archive Press for its upcoming English-translations of Korean literary works. Kim said the Dalkey series is one of the most anticipated projects this year, especially because he expects to see the books being reviewed by American critics upon their release in the United States.

“We can’t just translate works of Korean literature and publish them overseas -- getting reviews from foreign critics and scholars is also extremely important,” he said. “If they are reviewed by a foreign scholar who majors in Korean Studies, it’s likely that the book will be selected as a course material in Korean Studies programs at overseas universities. And there’s no better way of promoting the books than getting them reviewed by overseas reporters and critics.”

In its foray into being “foreigner-friendly,” KLTI is currently creating a list of contact information of local publishing houses’ translation rights departments. The institute plans to have it available on its website once the list is completed.

“We get a lot of inquires from overseas that they don’t know where to contact when trying to reach Korean publishers,” he said. “Every Korean author should have something available to pop up when someone Googles their name in English. It makes a huge difference.”

Meanwhile, Kim said local writers’ English skills can also make a difference in the promotion of their work overseas.

“Once they head off on a book tour abroad, they are interviewed by the foreign press, and meet with foreign fans and publishers,” he said. “It’s a great opportunity to share thoughts and views about their own work outside Korea. But relying on their interpreters can really limit their chances.”

Aside from the Dalkey series, KLTI also plans on developing another Korean literature series in English, which chronicles Korean literature of different periods, from traditional folktales to contemporary fiction. It is also scheduled to participate in a book fair in Beijing in late August.

Strengthening of KLTI’s educational programs for translators is also on Kim’s agenda.

“We are also making a book which provides information on Korean and foreign scholars who teach Korean Studies overseas, including each person’s short bio and their contact information,” he said. “Once we complete the book, we’ll mail them to every scholar featured in the book. What we hope to see is the scholars interacting with each other, and eventually having more discussions on Korean literature and where it can go overseas.”

Asked if there was anything he’d like to see happen, Kim brought up the budget the institute received from the Culture Ministry this year. According to the ministry, KLTI received about 6.9 billion won.

“The minister has told me to develop this institution as ‘the center of Korean literature and culture,’” said Kim. “But we certainly need more support in order to do that.”