Everyone has had the experience of throwing away a half-eaten block of cheese or half-empty carton of milk because it has exceeded its expiration date.

But the Korea Consumer Agency on Tuesday said most foods are safe even a few days after their expiration date.

“The expiration dates written on the cover of the products are usually for distribution. That is, they mean dates when the shop managers begin to take them off the shelves. At home, under well-controlled storage systems, one can eat expired foods without worrying too much about the datelines even if they have passed the dates by a few days,” Song Gyu-hye, a staff member of the agency, said. 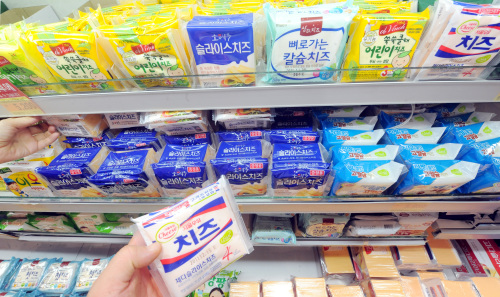 A consumer grabs a cheese product at a supermarket in Seoul. (Ahn Hoon/The Korea Herald)
They defined food that had lost 50 percent of its moisture or contained fungus or coliform bacillus as inedible.

The team found milk to be okay within 50 days from the written expiration date; liquid coffee 30 days; and sliced cheese 70 days. Frozen dumplings were edible for 25 days past their shelf life, but creamed pastries and cakes were safe to eat for just two days after the expiration dates.

“The precondition for the research is that the consumers hadn’t unsealed the products and stored them strictly in accordance with the instructions by manufacturers,” Song said, admitting that the period could be shorter for ordinary families where food is eaten in portions, exposing it to air and other substances.

The KCA has suggested that the government adopt two expiration dates ― “Best before,” and “Use by” ―- which are used in other parts of the world. The group noted that 1.8 percent of the foods manufactured and distributed in the country are discarded simply because they have exceeded the expiration date.

Under the single expiration date system, 610 billion won worth of food is wasted, they said.

Minister of Health and Welfare Rim Che-min told reporters earlier this year that the Korea Food and Drug Administration was considering adopting the dual system.

“It will provide consumers with accurate information about foods they eat and will save the producers on storage,” he said.

Some consumers’ groups are not convinced. They worry that consumers will be confused and sellers will take advantage to sell out-of-date products.

“The current logistics chain is very complicated. It means that unless a very credible system is established, many consumers will be buying nearly out-of-date food in the worst scenario under the new system,” said Kim Jae-ok, head of Consumers Korea.