The star of “The Big Bang Theory” is seated outside a small Hollywood restaurant, talking about his longing to play ordinary, run-of-the mill figures rather than the larger-than-life characters that actors and audiences sometimes embrace.

“Guys like Dustin Hoffman and Jack Lemmon have always been my leading men,” said the 36-year-old, leather jacket-clad actor, who minutes before was crushing the butt of a luxury cigarette with his scuffed combat boot. “Those are my guys. I know there’s something to be said for the leading men who veer more toward action and stuff like that ― the John Waynes, the Harrison Fords and guys like them. But my acting heroes were the guys that men might not necessarily aspire to be because they already are them. That’s what (Hoffman and Lemmon) represented to me and that’s what I want to try to help carry a torch for in my career.”

The relay is in full effect. Fondly remembered for his supporting role on “Roseanne” as Darlene’s wishy-washy boyfriend, David, Galecki has quietly moved to the forefront as one of the stars of “The Big Bang Theory,” playing an average nerd named Leonard. But there’s nothing average about the CBS sitcom’s performance: The series, now in its fifth season and past the 100-episode mark, is up 17 percent to an average of 15.7 million viewers, according to Nielsen. A key factor in the rise is its run in syndication on local stations and cable outlet TBS, which has helped to widen its exposure. In recent weeks, it has even managed to beat behemoth “American Idol” in the coveted 18-49 demographic. 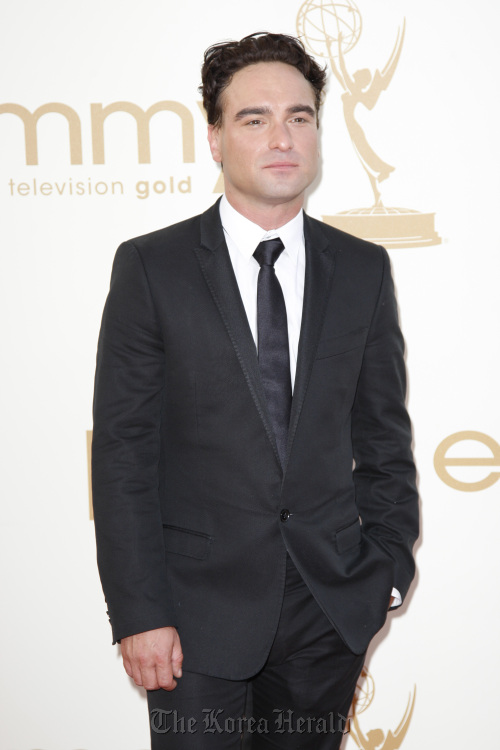 Johnny Galecki at the 63rd Annual Primetime Emmy Awards on Sept. 18, 2011, at Nokia Theatre in Los Angeles, California. (MCT)
“Putting it simply: It’s amazing,” Galecki said of the gain over “Idol.” “It’s really shocking to me. I mean, ‘Idol’ is event television, it’s not something people really Tivo. I’m not sure how we got here. I almost don’t want to question it. It only raises the bar for us. None of us feel like, ‘Oh, we can relax.’ But can you imagine what would happen if we had Jennifer Lopez on our show?”

In addition to the ratings success of “Big Bang Theory,” its stars have also been riding a wave of awards recognition in recent years. Jim Parsons, who plays the fussy geek opposite Galecki in the series, is a two-time Emmy champ. And Galecki finally broke the barrier, nabbing an Emmy nomination last year and a Golden Globe nomination this year for his character, the Cal Tech professor caught up in an ongoing on-again-off-again relationship with his hot neighbor Penny (played by Kaley Cuoco).

“My 14-year-old self would tell you to (...) yourself if you said all this would happen,” Galecki said. At that age, the Belgian-born actor had moved to Los Angeles from Chicago, where, as a young boy, he had begun acting in theater productions. Galecki and his family were set to move back to the Midwest a year later, until a last-minute role on the TV series “American Dreamer” sprang up.

Galecki, then 15, stayed behind on his own, living in a studio apartment in Burbank and riding a motorcycle to the studio every day. He said his late co-star Robert Urich offered Galecki the room above his garage, But the teenager refused: “I didn’t because he wouldn’t let me smoke there.”