A $13.5 million gift from philanthropist David Rubenstein funded conservation and a new case for the only original Magna Carta in the United States. Rubenstein bought the historic document at auction in 2007 for $21.3 million and sent it to the National Archives on a long-term loan.

Rubenstein, who is co-founder of the private equity firm The Carlyle Group, said he bought the document previously owned by Texas billionaire H. Ross Perot because he wanted to keep it from leaving the country. The only other copies are in Britain and at Australia’s parliament.

The U.S. copy was one of four reissued in the year 1297. It still carries the wax seal of King Edward I of England, which is attached by a ribbon under the document. 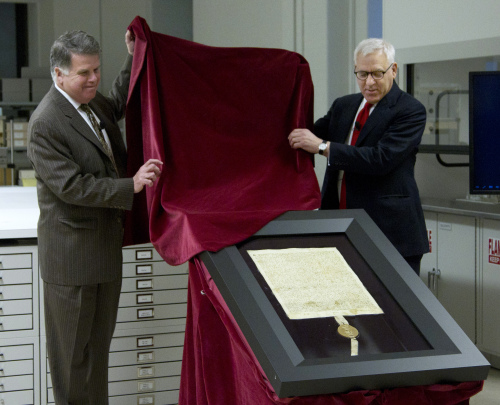 Carlyle Group co-founder and Magna Carta owner David Rubenstein (right) and Archivist of the U.S. David Ferriero, unveil the 1297 Magna Carta in its new state-of-the-art encasement at the National Archives in Washington, Thursday. (AP-Yonhap News)
As a history buff, Rubenstein, 62, has become somewhat of an expert on Magna Carta’s legacy dating to 1215. That’s when noblemen came together to declare their rights to King John, including the right to a trial by jury and the first limits on arbitrary taxation that led to the principle of “no taxation without representation.’’

“This became something that set the trend of common law’’ in Britain and later in the United States as founding fathers such as Thomas Jefferson and James Madison referred back to Magna Carta, Rubenstein said.

Rubenstein said he became interested in the ideas behind the Constitution while working for Congress in his 20s, which led him to study the Magna Carta. The document will likely remain at the National Archives permanently, he said.

“You can’t be buried with these documents as far as I know,’’ Rubenstein said.

Magna Carta will return to public view at the National Archives on Feb. 17. A new interactive display will allow visitors to zoom in on an image of the parchment and see how it was repaired. They can read an English translation of Magna Carta’s Latin words and see comparisons to language in the U.S. Constitution and Declaration of Independence.

On Thursday, conservators showed the document in its new protective case developed by the National Institute of Standards and Technology.