Business cooperation between Seoul and Tokyo is getting stronger and closer as more and more Japanese companies are setting up operations in Korea, a top Japanese business leader said.

“We thought that in Japan, our supply chain was perfect, but the earthquake and tsunami made our perfect supply chain a disaster. So Japanese companies started to think about diversifying the supply chain,” Tsutomu Awaya, chairman of Seoul Japan Club, told The Korea Herald.

The club is the largest association of Japanese businesspeople in Korea, with members consisting of almost 1,900 individuals and 370 companies.

After the disaster that crippled the northern part of Japan, Japanese companies started to inquire about the economic and investment climate in Korea with the Japan External Trade Organization and the Seoul Japan Club, according to Awaya.

From January to August 2011, direct investment from Japan to Korea increased 191 percent compared to the same period the year before. 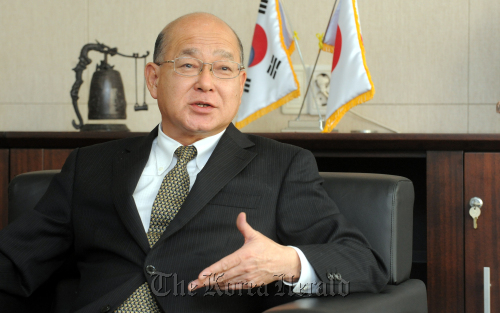 Tsutomu Awaya. (Ahn Hoon/The Korea Herald)
“We are both small countries, so we have to import our natural resources like oil and gas, minerals and food,” he said. “It would be more efficient for both countries to work together in investing overseas to develop such natural resources which would give us more competition or lower prices.”

This is the case with Mitsubishi, the Japanese giant of which Awaya is president and CEO in Korea.

“We are going to jointly develop a natural gas project in Indonesia,” he pointed out.

Also, others like Sumitomo Corporation have joined together with Korea Resource Agency to operate a large-scale nickel project in Madagascar.

The Seoul Japan Club believes the future of the business relationship lies in a free trade agreement between the two export giants.

“It is not only a matter of tax and duty, of course it’s a part of it, but beyond that, the FTA would eliminate barriers and regulations,” he said. “If it happens, our economic relationship would be much closer and stronger.”

This year marks his fifth year living in Korea. And he is planning to step down as head of the Japanese Chamber of Commerce. His successor is expected to take office in February.

For the first time in its history, the Seoul Japan Club started accepting membership from companies and individuals who are not Japanese.

“We are trying to open the window and make the association more global,” he said.

“We have been working hard to strengthen the relations of both countries from a business point of view,” he said. “We have the same interests as that of any chamber of commerce so we are interested in business not political issues.”