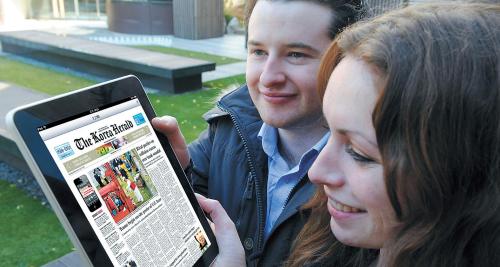 
Smart phones and tablet PCs have dramatically changed the features of the news industry. A host of media companies around the world have jumped into the digital market to secure a footing in the massive shift toward online and mobile news.

The tablet PC market led by Apple and Samsung Electronics is more important for newspapers. While smartphones are restricted by small screens, tablets boast bigger screens and a better experiences for users who want to enjoy multimedia-rich content.

The Korea Herald, the country’s top English-language newspaper in terms of offline and online circulation, is also taking a big step forward in the rapidly changing news industry.

The Korea Herald has recently launched a new app for the iPad combining real-time news and English education.

It is the fourth and latest new media platform for The Korea Herald, which has been trying to attract more readers across different platforms with the development of digital devices. 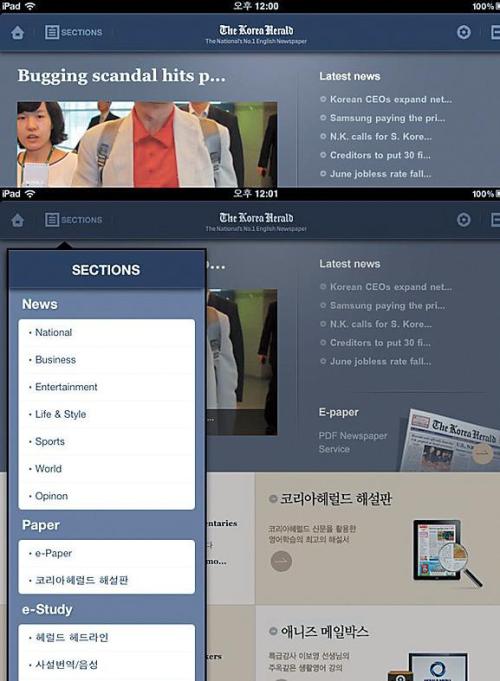 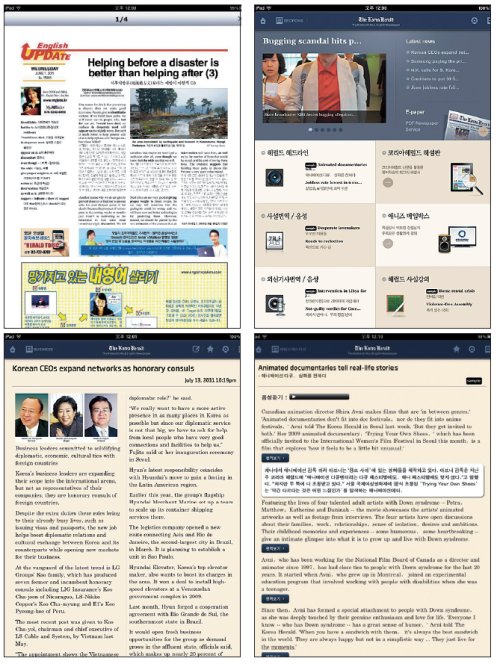 Some of the iPad app’s features are similar to the iPhone app’s. But the new app incorporates more multimedia content, designed to help readers enjoy not only English news but also other English education content.

It offers translated versions of selected Korea Herald news articles and editorials, along with audio services.

Short video lectures by Lee Bo-young, an English teacher famous for her fun and easy teaching style, will offer useful English expressions and idioms based on The Korea Herald news. The app also provides the translation of news articles by foreign press.

Favorite stories and study content can be saved in a separate folder and shared via email and social networking services.

The app also delivers the same news content with the printed daily through the PDF e-paper. Users can download the files, which allows them to read stories when they are not connected to wireless networks.

The Korea Herald is one of the first major newspapers in Korea to launch an app based on HTML 5.

The iPad service is currently available for $9.99 a month.

Paid newspaper apps are still new in Korea, as users are reluctant to pay for apps unless they are very cheap.

Despite this obstacle, The Korea Herald has decided to launch a paid app believing that people will pay for high-quality content. The Korea Herald has long been the No.1 English-language newspaper in the Korean market and its brand recognition is also greater than that of its competitors in cyberspace.

The Korea Herald has been implementing a drastic upgrade of the news content delivery system, as the company adopted what is called “content management system” to manage news articles and photos and distribute them to different platforms efficiently.

The streamlined news distribution system is currently bolstering the company’s multi-platform strategy. For instance, if a new platform for delivering news is required, The Korea Herald can respond to it swiftly through the new system, reflecting its resolve to adapt to the new media environment characterized by rapid changes and innovation.

Based on the system, the Korea Herald overhauled its entire homepage in 2010 and is also working on constant updates and further upgrades of the main homepage,

The Korea Herald also introduced the country’s first English mobile news alert service named “Herald Topic” in 2010. The service sends three text messages a day, in form of an English headline and a Korean translation of a key word, a format aimed at students and business people who want to learn English through real-time headline updates.