The movie claimed the No. 2 spot by bringing in more than 1 million viewers at local cinemas as of Wednesday, a week after making a robust debut, the Korean Film Council, a government agency in charge of promoting domestic films, said on Thursday.

The 1 million viewers is double the number of viewers needed for the film, whose net production costs totaled only 500 million won ($445,831), to pass the break-even point.

Boosted by the popularity, the number of screens showing the film across the country has risen steeply from 244 in the opening week to 456 this week.

Few had expected such a box-office hit of the low-budget film even when it was screened during the Busan International Film Festival, one of the largest film festivals in Asia, last year. 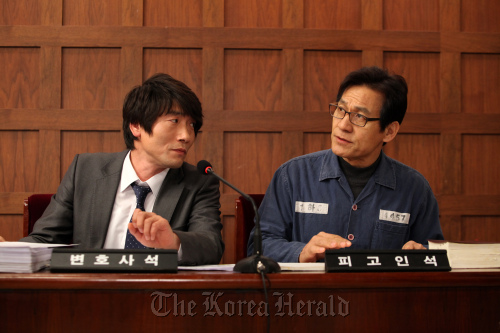 A scene from “Unbowed” starring Park Won-sang (left) and Ahn Sung-ki. (NEW)
Directed by Chung Ji-young, “Unbowed” tells the story of college mathematics professor Kim Myeong-ho, who is “unfairly”fired for pointing out an error in the school’s entrance exam.

After losing a series of lawsuits he files for reinstatement, the professor visits a presiding judge, who rejected his appeal, with a crossbow in his hand, demanding a fair judgment.

Veteran actor Ahn Sung-ki stars as the headstrong professor Kim, who served four years in prison until early last year after undergoing a series of court ordeals for allegedly attacking the judge with his crossbow.

The movie’s portrayal of judges is wholly negative. In the movie, judges deal with Kim’s behavior as a challenge to the authority of the judiciary. Evidence is often ignored, and the trials proceed very quickly.

As Chung’s film was expected to become a second local box-office sensation like last year’s controversial box-office hit “Silenced,” the Supreme Court on Jan. 11, a week before the new film’s opening, unusually released a two-page manual to judges of respective courts across the country. The manual contained summarized information on facts of Kim’s case.

The film “Silenced” is based on the shocking true story of teachers at a Gwangju school for students with disabilities committing repeated sex crimes against hearing-impaired students for five years starting in 2000.

The movie prompted intense public attention to a case that had largely been forgotten, fueling public outrage not only at the disturbing crimes, but also over the light punishments the convicted teachers received.

Promotors of the “Unbowed” cautiously predicted the movie would break the 2-million mark.

“We thought it would be fortunate if the movie hit the break-even point in the opening week, and it has already drawn double the expected number of viewers,” said Lee Si-yeon, president of “Heungmi Jinjin (Fascinating),” a company for promoting the movie. “Viewers’ responses have been so explosive that we cautiously expect the number of viewers to reach 2 million.”