Kim is looking to take Korea’s progress further this year, as it chairs one of the biggest international organizations for gender equality.

The country has been accepted to chair United Nations Women, the U.N.’s entity for gender equality and the empowerment of women, according to U.N. officials.

The minister says this will give Korea the opportunity to showcase its place on the international stage as a leader in progress for women.

“We will make sure that when there is need for aid or assistance after natural disasters, women will not be left out,” said Kim.

“Especially in development we will make sure that women are equally considered.”

As the chair, Korea will oversee regular sessions within the country twice a year, which will determine key issues for the U.N. entity including budget and organization.

“Through a memorandum of understanding signed in December with U.N. Women, the ministry will also hold seminars and workshops that deal with issues such as developing women’s capabilities and preventing abuse against women.

“Our country not only expressed proactive support for the forming of U.N. Women, but also made an agreement to contribute a sizable donation of $4.7 million,” Kim told The Korea Herald.

The appointment came after Korea successfully hosted the Fourth High Level Forum on Aid Effectiveness through which dignitaries, including U.S. Secretary of State Hillary Clinton, stressed the importance of women’s empowerment and gender equality.

On Tuesday, South Korean ambassador to the U.N. Kim Sook was appointed president of the U.N. Women board.

And Korea is emerging quickly as one of the leaders in gender equality for reproductive health, empowerment and the labor market.

The U.N. Development Programme’s Gender Inequality Index, which measures all three dimensions, shows that Korea is just outside of the top ten countries behind France.

The performance is remarkably high when considering it is nine places higher from last year, Kim noted.

But she acknowledges that Korea has much to change in the social and economic field.

According to the Organization for Economic Co-operation and Development’s employment outlook for 2011, Korea has one of the lowest employment rates of women among the member states. 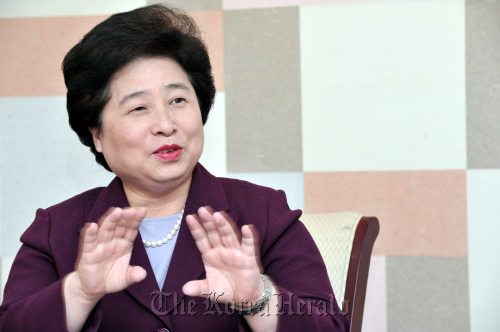 Korea is largely regarded as one of the worst environments for gender equality, as the nation’s gender wage gap is more than double the OECD average. Other studies show that only 8 percent of women have supervisory responsibilities here, and only one female university graduate is employed per every four male graduates. A little less than 5 percent of the nation’s corporate executives are women.

“Korean women in their early 30s usually see a halt in their careers because of marriage and child-rearing, and when these people try and enter the workforce again, they cannot find contracted full-time jobs and settle for low wages or freelance work.”

This is an issue that the OECD continues to indicate, repeatedly calling on Korea to improve working conditions for women with families.

This is why such issues are among the Gender Ministry’s priorities.

“We are trying to make an environment where women can continue to work, meaning better childcare services at workplaces and more flexibility in their maternity leave,” said Kim.

And in cases where employers do not offer childcare services, the ministry runs babysitting services as well, which is important when waiting lists for daycares are often long.

“We run a babysitting service where people will come over to your home and watch your child, and depending on the income status of the family, the government provides up to 70 percent of the fees.”

The ministry knows these policies will work for Korea’s advantage.

“When we try to implement policies for a more family-orientated environment, we have seen productivity numbers go up, because employees develop a strong sense of pride and loyalty to their companies.”

The ministry is also looking to tackle the low female employment rates, as shown by the OECD data.

They are worried that multinational corporations will continue to take advantage of the hiring opportunity here as Korean companies do not hire many talented women despite their qualifications.

In 2010, research by associate professor Jordan Siegel of Harvard Business School found that highly educated Korean women are not being hired for management roles by local companies.

“I am always meeting with CEOs to discuss such issues,” said Kim, adding that the ministry has a growing program that recognizes gender friendly environments.

The minister also wants to provide a safe environment for the growing number of immigrant wives entering the country.

“Since there are so many instances of families and husbands keeping their foreign brides locked up at home, we have an MOU with the Justice Ministry to keep tabs on immigrant wives and offer them counseling services right at their home.”

“We want them to come over with full knowledge of their counterpart’s psychological state, job status, criminal background and other important information,” she said.

Kim is hoping to prevent instances like that in 2010 when a 20-year-old Vietnamese woman was stabbed and killed by her 47-year-old mentally ill Korean husband just days after arriving here.

Kim noted that the issue of multiculturalism in Korea is overseen by a large number of government branches.

According to government data, as of September, there are more than 143,000 immigrant spouses living in the country, with many from Vietnam and China.