Few actors are as readily recognizable by their vocal cords as Max von Sydow, the great Swedish actor who arrived on the international scene in 1957, as a knight who encounters Death ― and plays chess with him ― in Ingmar Bergman’s classic, “The Seventh Seal.”

Von Sydow would make 10 more films with Bergman (“Without him, I would certainly not have been here today,” he says). And he would make his mark in big commercial films, playing a sly assassin in “Three Days of the Condor,” Jesus Christ in “The Greatest Story Ever Told,” and a demon-chasing priest in “The Exorcist.” A few years back, von Sydow was riveting as a frail father, confined to his apartment, in “The Diving Bell and the Butterfly.”

So here’s the irony: In “Extremely Loud and Incredibly Close,” opening Friday, von Sydow doesn’t utter a word. His character, known as The Renter, is a mysterious figure who comes into the life of a young boy on an epic scavenger hunt, looking for the lock that fits a key left to him by his father, a victim of the 9/11 attack on the World Trade Center.

Von Sydow’s old stranger accompanies the boy ― played by newcomer Thomas Horn ― on his curious quest across the boroughs of New York. The Renter communicates by scrawling on the pages of a notebook. It is the first time in a career marked by some 140 films and TV movies that von Sydow has not uttered a single word. 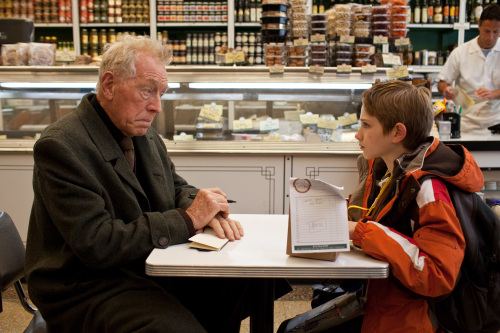 Max von Sydow, left, as The Renter and Thomas Horn as Oskar Schell during the filming of “Extremely Loud and Incredibly Close,” a Warner Bros. Pictures release. (Francois Duhamel/Warner Bros. Pictures/MCT)
“It really wasn’t a challenge for me,” von Sydow said, sounding just like von Sydow sounds, on the phone from New York recently. “He’s a totally normal character in a way ― he has just the trauma of tremendous tragedy that he has experienced when he was young, and he decides that he will never again speak in his life, and he sticks to that.

“But for that,” von Sydow adds, “he’s totally normal. He talks through his writing. So it was not a matter of portraying somebody in a different way, just because he doesn’t speak. He was a very interesting character, and I was very happy to be offered the part.”

Von Sydow, 82, took the role readily, even though, he says, half-joking, “I really shouldn’t do anything ― I should really be retired, but every now and then you are tempted.”

And it’s a temptation that pays off ― for the audience, and, perhaps, for von Sydow, too, who has only a single Academy Award nomination on his extensive resume (best actor, for the 1987 Danish film, “Pelle the Conqueror”). There is a lot of buzz for a supporting actor nomination ― Dave Karger, forecasting the Oscars in Entertainment Weekly, picks the stage and screen veteran as one of the likely candidates, noting that von Sydow “expresses so much heartbreak without saying a word.”

Adapted from the novel by Jonathan Safran Foer, “Extremely Loud and Incredibly Close” stars Tom Hanks as the father (seen in flashbacks), Sandra Bullock as his wife and the boy’s mother, and a roster of supporting players that includes Viola Davis, John Goodman and Jeffrey Wright.

But it all turns on Horn, who was 13 at the time director Stephen Daldry (“Billy Elliott,” “The Hours,” “The Reader”) cast him in the lead.

“When I read the script,” says von Sydow with a chuckle, I thought, ‘Oh God, I hope they have a good boy for this. If they don’t, I shouldn’t make the movie.’

“But it turned out that Thomas is an extraordinary young man. He is very bright, very intelligent, and also very ― how can I say it? ― disciplined, in a positive way. ... It was like working with a grown-up actor. He knew exactly what he was going to do, and did it very well.

“You would think that a young kid would be sick and tired of repeating himself all the time, and doing retakes and retakes, but no, he did it, and he did it well.”

Did von Sydow give this “young kid” any pointers?

“He never asked me anything, and I didn’t feel that I should give him advice. It was not needed, and then, of course, Stephen Daldry is a wonderful director who has certainly worked with children before.

“But, no matter, Thomas is not a regular child.”

Von Sydow has lived in Paris since the mid-1990s, and became a French citizen in 2002. He met his wife, Catherine Brelet, while he was shooting a film (“Time Is Money,” with Charlotte Rampling) in the south of France.

“I had divorced, and so I was a free man,” explains von Sydow, who spent a good part of his career until then living in Los Angeles. “And after some time we were married, and we live there, and we are very happy. France is a wonderful country.”

And so, after the hype and the hoopla of the awards season passes, von Sydow plans to go back to his life of semiretirement in Paris.

“I reluctantly receive scripts,” he says, “and, if something really important shows up, I’ll do it if I think I can. And I think I’ve been lucky very recently, because I’ve been offered good parts ― but I don’t want to just work for the sake of working. There are other things to do.”