An elite international school opening in Seoul this August looks to harness the academic fervor here to offer students an educational experience beyond the mindless repetition which critics say plagues them.

According to the headmaster at Dwight International School Seoul, the school will seek to offer education that follows an internationally recognized curriculum that will not have students learn simply to regurgitate information.

While in town before the opening, the executive director for the Dwight Family of Schools said that DISS and its sister schools in Manhattan, New York, London, Beijing and Victoria, Canada share a unique concept called the “spark of genius.”

“… we believe in every child there is some spark of genius and we are able to extend that in some way through personalized learning through global vision and our community service,” said Skeoch.

This concept is unique in Korea, where traditionally students slave away most hours of the day focusing on rote learning and cramming. The concept has largely proven effective, as the N.Y.-based school sends part of its students to Ivy League schools every year.

“I’m interested in investing in young people and the balanced side of education where academics and their personal sides are also flourished,” said Skoech, whose school sits within the Sangam Digital Media City, western Seoul.

This will be easy for the school here as it will adopt International Baccalaureate, an internationally recognized program that not only emphasizes the intellectual, but also the personal, emotional and social skills needed.

A point of pride for the Dwight Family of Schools is that it was the second American school to adopt the IB program, allowing students to obtain an educational qualification when they transfer to another school.

“The IB rings true in the philosophy and mission of the Dwight School and also the Dwight Family of Schools and it’s extended in the teachers.”

Students will also have to learn social skills that encourage community leadership and activism.

“Students have to fill hourly commitments of service to the community in the way that they want to do it,” said Skeoch. 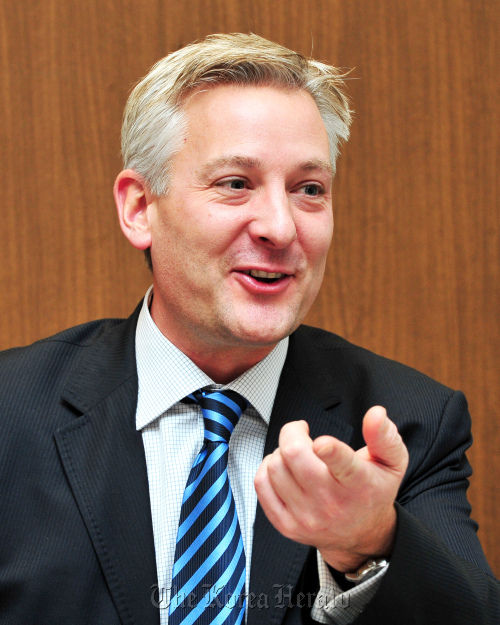 Kevin Skeoch, headmaster of Dwight International School Seoul, talks with The Korea Herald about the new school set to open this August. (Park Hyun-koo/The Korea Herald.)
“They are not driven by any teacher, they have to come up with ways in how they are going to support the community,” he added, highlighting the focus the school has on teaching leadership and being proactive.

But because the school has so much to offer, it has an equally strict criterion so that the best students will be amongst the best peers.

“Chiefly, I think I am looking for good grades, a positive attitude and some sort of spark that makes them different,” said the headmaster, adding that the school has yet to start enrollment.

Students here are used to associating high grades with success, but that train of thought can lead them astray in applying for DISS.

“I’m looking for the balanced child, the child that is personable, the child that has a great presentation to him so that they can give back to the school as well,” he said.

However, Korean nationals looking to get into the international school will face strict competition as they will fill no more than 20 percent of the 540 kindergarteners, primary and secondary students.

The majority of the school will be filled with expatriates and other children of families working in international companies.

Under the current law, international schools are not allowed to fill more than 30 percent of their places with Korean nationals.

Following the school’s trend in diverging from the Korean norm, success for its students is also judged by a different set of standards.

“I would like students from the Dwight International School Seoul to go to the best universities that are in the world, but I would be just as happy if they went to a place that made them happy and was value added for them as well.”

Stephen Spahn, the headmaster of Dwight School and executive director of the International Baccalaureate Organization, plans to open the IB Asia Center in the DMC by 2012 and to host the 2014 IB Convention in Seoul.

In Seoul, there are currently 21 international schools where about 6,700 students are enrolled. Of them, 12 are for English-speaking students and nine are for others from countries such as Germany, Italy, France, Japan, China and Mongolia.