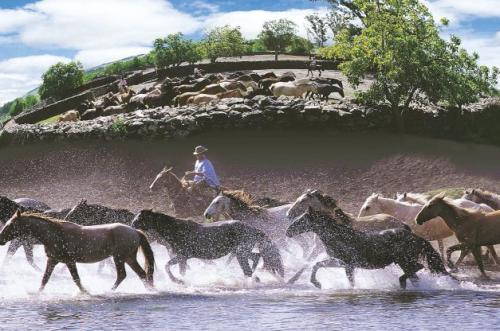 Troop of Creole horses in the Uruguayan countryside (Testoni Studios)
An exhibition to showcase the beauty of Uruguay is being held in Korea.

The photography exhibition entitled “Uruguay: The Best It Can Offer” is running from Jan. 13-24 in Seoul.

“The aim is of showing different aspects of the country, including its natural characteristics, its cultural relics, urban landscapes and rural life, and to reflect the elegance, passion and vitality of the Uruguayan territory through these pictures,” said the Uruguayan ambassador to Korea Alba Rosa Florio Legnani.

The photographs on display showcase Uruguay’s diverse landscapes and wildlife at the Baik Song Gallery in the Jongro-gu area of the city.

The exhibition is being held to mark the bicentenary of Uruguay’s liberation process starting in 1811.

The long road to independence started with a revolt against the Spanish at the Battle of Las Piedras, but it was not until 1828 that the treaty of Montevideo gave birth to Uruguay as an independent state.

The 26 images in the exhibition from Uruguay’s renowned Testoni Studios are being displayed to show what the country has to offer the world by showing scenes from the country’s entire territory.

The exhibition has been organized by the Uruguayan Embassy and the Korean Council on Latin America and the Caribbean. It was sponsored by the Korea Foundation and the Baik Song gallery with the assistance of Gallery Banditrazos.