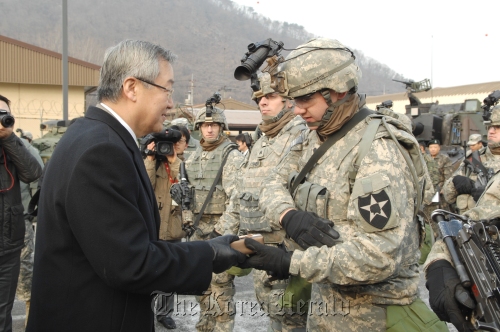 Minister of Foreign Affairs and Trade Kim Sung-hwan (left) hands a gift to a U.S. soliders at the U.S. Army’s 2nd Infantry Division in Dongducheon, 40 kilometers north of Seoul, on Friday. (Ministry of Foreign Affairs and Trade)
South Korean Foreign Minister Kim Sung-hwan said Friday the country’s alliance with the United States is more firm than ever to help deter any “provocation” from North Korea, amid concerns over stability in the North after the death of Kim Jong-il.

Kim made the remarks as he visited the U.S. military’s 2nd Infantry Division located in the city of Dongducheon, 40 kilometers north of Seoul, to offer American soldiers encouragement and New Year greetings.

“The ROK-U.S. alliance stands more firmly than ever before and plays a pivotal role in maintaining peace and stability on the Korean Peninsula while responding to North Korean provocation,” Kim told the U.S. soldiers, referring to South Korea by an acronym of its official name.

Since the sudden demise of Kim, who died of a heart attack on Dec. 17, his third son and chosen heir, Kim Jong-un, has taken the helm of North Korea. The North’s media has burnished a hard-line image of the young leader, believed to be in his late 20s, in an apparent move to solidify internal unity.

This week, a ministry-affiliated think tank warned of “military adventurism” by the North’s new leader, raising the possibility of another nuclear test or missile launch to help the young Kim win military credentials.

Calling the 2nd Infantry Division a “spearhead of the combined defense posture,” Kim said the level of military cooperation between South Korea and the U.S. is “stronger than ever.”

About 28,500 U.S. troops are stationed in South Korea, a legacy of the 1950-53 Korean War, and the primary mission of the U.S. division in Dongducheon is the defense of the South in the initial stages of any invasion from North Korea until other U.S. units can arrive.

Kim was accompanied on his visit to the division by U.S. Ambassador Sung Kim and Gen. James Thurman, the top commander of United States Forces Korea.

South Korea and the U.S. have been in consultation over a U.S.-led campaign to sanction Iran against seeking nuclear weapons programs.

Robert Einhorn, the U.S. State Department’s special adviser overseeing sanctions on Iran, will arrive in Seoul Monday to discuss the issue, although South Korea has sought an exemption from a Washington sanction that could hurt its imports of crude oil from Iran.

When asked about the Iranian issue, Kim told reporters, “I think some measures, to some extent, are needed to protect our companies,” adding that South Korea will closely consult with the U.S. delegation.