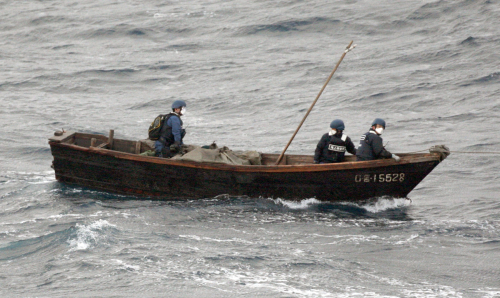 A wooden boat with Japan Coast Guard officials on board is towed by the coast guard after it was found off Okinoshima, Shimane Prefecture, Friday. (AP-Yonhap News)
Japan’s coast guard on Friday found a wooden boat carrying three men and the dead body of another individual, believed to be adrift from North Korea in waters off the western Japanese island of Okinoshima, a report said.

According to Japan’s public broadcaster NHK, coast guard officials initially suspected that they may be North Korean defectors after spotting Korean characters on the hull of the small boat carrying them.

But the North Koreans said that they left from a port in North Korea for a fishing trip in mid-December, but an engine problem left them adrift, insisting that they did not intend to defect from the North, according to the report.

The Japanese government is widely expected to fly them to China

after granting a temporary stay in Japan if they wish to return to North Korea, the NHK said. Japan and North Korea have not established diplomatic relations.

In September last year, nine North Korean defectors aboard a wooden boat were found drifting off Japan’s west coast. The South Korean government accepted them after they expressed their wish to defect to Seoul. (Yonhap News)