Three months ago, Mick Milne’s family did not know if he would live to see 2012.

The 47-year-old from New Zealand spent three weeks in Pusan University Hospital’s intensive care unit fighting for his life after his liver failed in October.

But friends, family and even strangers from around the world have rallied to help the English teacher receive a life-saving liver transplant.

Mick, who has lived in Miryang for almost five years, discovered that his Korean National Health Insurance only covered some of his medical costs and that $50,000 was needed to cover out-of-pocket medical fees.

His 0-negative blood type, which is rare in Korea, further complicated surgery even if a matching donor organ was found as enough blood would have to be on hand in case anything went wrong. 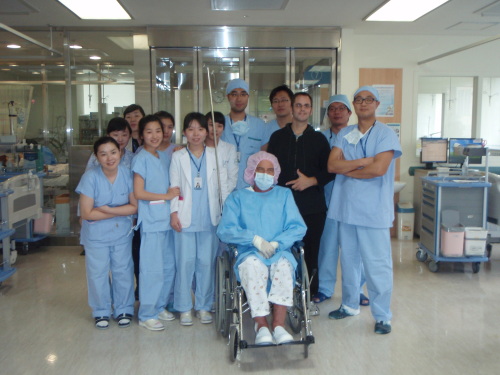 But without $50,000 dollars, the essential operation could not have gone ahead.

Friends here started a campaign to help raise the badly needed cash and the operation was successfully carried out at the Yangsan hospital on Dec. 7.

Randall is now back in New Zealand and Mick, who is now recovering at home, wrote a message online to the friends and strangers who donated to help him. 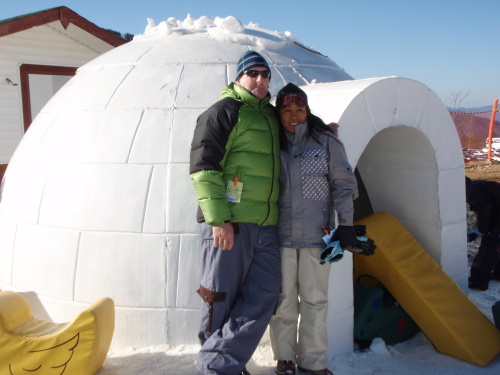 Mick Milne and his wife Elvie in Edan Valley, Korea, enjoying a Yangsan snow day before he became ill.
“As I began to come back to the real world after the operation Elvie would visit and tell me what was going on while I was just laying in bed ordering nurses about,” he said.

“Tears built in my eyes and throat and I thought: ‘Why me?’

“These people don’t know me. I’m just Mick. Nobody special, just a fool who enjoys doing what he does and maybe enjoyed too much and ended up in hospital with a small medical issue.”

But friends and strangers in Korea campaigned to raise the cash to support his vital surgery via Facebook and online forums. Friend Anita Soni who helped encourage and organize donations said their efforts helped collect 27 million won by the end of December.

“As soon as we heard about Mick from another teacher, and the fact that the hospital bills were accumulating quickly, we jumped in with both feet and reached out to every community we could think of,” said the Miryang resident who works as one of the city’s 17 foreign teachers along with Mick.

“The people who have known Mick since he came to Miryang were very involved with helping his wife and family survive the day to day necessities.

“They were very hands on, going back and forth to the hospital. These individuals have families of their own as well, and still continue to help Mick and his family.”

Money raised so far has gone toward paying for medication, treatment, surgery and Randall’s discharge as well as his family’s living expenses, including transport costs for hospital visits. But Anita said another 23 million won is needed to cover the outstanding hospital bill.

“The response we have received is absolutely amazing,” she added. “Foreigners and Koreans have both come forward to help us out. Schools in the area have pooled together to donate, and various groups of foreigners across Korea have held events to raise money.”

Churches from all over the country donated funds, while people held bake sales, Christmas carol concerts, parties, lottery draws, and hair shaving events to aid Mick’s recovery. Donations came from Koreans, and foreigners here, and from New Zealand, as well as friends and family of the fund-raisers in countries all over the world.

“I think part of the astonishing response we have received so far is that most of it came from strangers,” Anita added. “We are truly, and whole heartedly grateful to everyone who was able to help in one way or another.”

Although he is still weak and struggles to walk up the stairs to his apartment, Mick told friends he was making progress and has learned from the experience.

“Liver transplant treatment ... you don’t want it,” he added. “Some of it is embarrassing, painful and sometimes confusing. The best feeling is going home, the medication is confusing but I am working on it.

“The physical feeling was described to me as: ‘You are like a new born baby, weak and fragile. Be careful and do things slowly.’ I’d have to agree with that.”

His brother Randall added that Mick would still need financial assistance given he is unable to work for possibly the next six months.

“He is making an excellent recovery since the operation, and is slowly but surely returning to full strength,” he said. “However the recovery period could extend over the next 6 months to 1 year.

“I would like to thank all the people who have donated money, or assisted in other ways to help Mick and his wife Elvie get through this.

“It has been a very difficult time for those close to Mick, fyet it has also been quite magnificent to see the generosity and support from others who have helped.”

Anyone wishing to donate can do so via Mick’s PayPal account: Mick.milne@gmail.com or by depositing a donation to his Nonghyup Bank account 81105752067773.