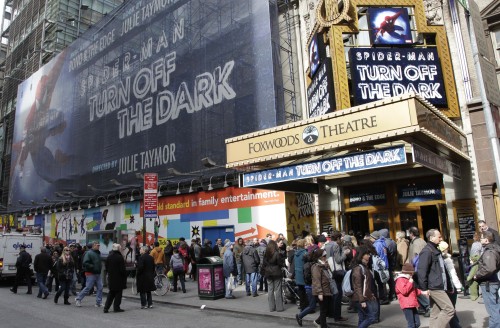 People line up to enter the Foxwoods Theatre for a matinee showing of “Spider-Man: Turn Off the Dark,” in New York. (AP-Yonhap News)
NEW YORK (AP) ― Look who’s got a big smile behind his mask on Broadway ― none other than the once-mocked Spider-Man.

The Broadway League reported Tuesday that “Spider-Man: Turn Off the Dark’’ took in a whopping $2,941,790 over nine performances last week, which is the highest single-week gross of any show in Broadway history.

The Spider-Man show shatters the old record held by “Wicked,’’ which last January recorded the then-highest one-week take on Broadway with a $2,228,235 haul, though over eight-shows. The numbers are not adjusted for inflation. Last week, “Wicked’’ took in $2,712,535 over nine shows.

Both shows’ haul reflect the use of premium seating, in which producers charge higher prices for certain days and certain seats.

Also, “Wicked,’’ which is performed at the Gershwin Theatre, has about 100 seats less than the 1,930-seat Foxwoods Theatre, home of the superhero musical.

The stunt-heavy Spider-Man show, which at $75 million makes it the costliest ever on Broadway, muscled to the top despite a turbulent history, including injuries to actors, delays in opening night, poor reviews and a record-breaking preview period.

Many shows this holiday season added a ninth show to their regular eight-show week. Most had a happy holiday as a result, including “The Book of Mormon’’ with $1,752,601 over nine shows and “The Lion King’’ at $2,444,132 over nine performances.

“How to Succeed in Business Without Really Trying’’ with Daniel Radcliffe ending his Broadway run broke the box office record at the Hirschfeld Theatre the week ending Sunday, grossing $1,910,224 over nine performances.

Hugh Jackman also ended his 10-week concert show run at the Broadhurst Theatre on Sunday after having earned $2,057,354 in its final nine performances, the highest weekly gross recorded by the Shubert Organization, which owns the Broadhurst and 16 other Broadway theaters.