More and more people are expressing themselves with pricey headphones, with some fashion-forward music lovers rocking updated versions of the oversized headsets popular in earlier eras.

Bose has been known for its larger headphones in recent years, and now celebrities have taken note and aided in the resurgence of the ear amplifiers. In 2008, Monster launched Beats by Dre with Dr. Dre, and it is the most recognizable of celebrity-branded headphones. Monster later released headphones with Lady Gaga, Justin Bieber, Diddy, Daft Punk, Nick Cannon and LeBron James.

This year, 50 Cent, Quincy Jones and Ludacris released their own line of headphones.

Dre, the Grammy-winning rap legend who has produced hits for Eminem, 2Pac, 50 Cent and Mary J. Blige, says he is offended when he sees people using generic headphones.

“It’s almost like a knife in the heart,’’ he said while promoting the headphones last year. “We’re in the studio, at least me, for years at a time trying to work on music, tweaking it, trying to get the sound right, and for people to walk around and listen to the music on those cheap white headphones is ridiculous.’’

“You go out and spend three, four hundred dollars on an iPod, and then you go put your earphones in and your iPod sounds like crap,’’ said Jimmy Iovine, chairman of Interscope, A&M and Geffen Records and co-launcher of Beats by Dre, as he was standing with Dre. “This is about releasing the sound that’s in the iPod.’’

Monster’s CEO Noel Lee took it a step further: “Most people have never heard what their iPod sounds like.’’ 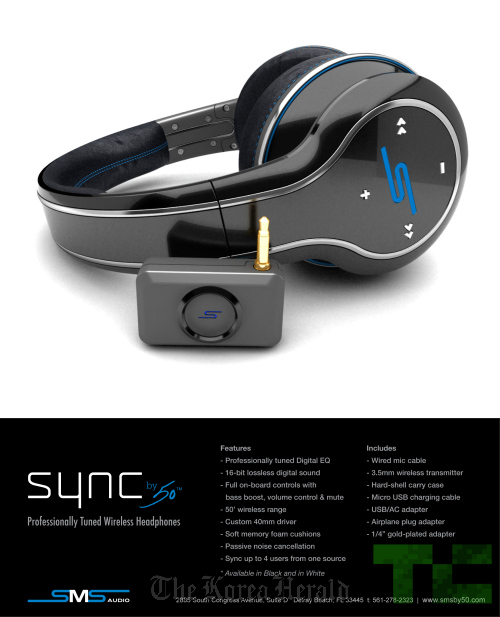 Sleek by 50 Cent Platinum headphones. The trend has been changing from 10 years ago, when the small, white ear buds that came with the iPod were the symbol for listening to music on the go. (Sleek Audio)
Research shows that most MP3 listeners own multiple headphones, according to Karim Noblecilla, director of product marketing for Sony’s Personal Audio Accessories division.

“That’s how we’re seeing the market,’’ she said. “People have two, three, even four sets for different purposes.’’

Noblecilla says Sony has a range of headphones targeting specific and unique demographics, from surfers to 13-year-olds. Its newest series, the Balanced Armature, is billed as the “smallest and lightest in-ear digital noise canceling headphones in the market today.’’ It ranges from $80 to $500, and Sony says that although the headphones are small in size, they can “achieve high resolution sound.’’

Noblecilla says style and appearance have played a heavy role in headphone production in recent years. Diddy said that was his contribution to his line, Diddybeats.

He compared his headphones to the “sleekness of a Ferrari,’’ and added that the look matches its high sound quality.

Oversized headphones were a big trend in the 1970s and 1980s ― a time when hip-hop was emerging as a genre and people walked around with boomboxes, blasting a sound that Lee believes the iPod generation has missed out on.

“If you’re (in the) baby boomer generation, you grew up with speakers ... (but) during the transition from an audio world to a video world, we kind of lost the audio in favor of the video development,’’ he said. “The iPod generation ... they never got to hear really deep bass.’’

But 50 Cent, who says his line is “better than the others,’’ believes his competitors aren’t making headphones for all styles of music.

“I understand that they’re trying to make it more attractive to a hip-hop demographic with the bass and stuff like that, but you listen to other music that isn’t from that genre (and) it’s way off-balance,’’ he said in a recent interview.

Iovine oversees record labels that are subsidiaries of Universal Music, the home to artists who have released headphones via Monster like Lady Gaga, Diddy and Bieber, as well as acts like Rihanna, Kanye West, Eminem, the Black Eyed Peas and Lil Wayne. Iovine has been able to promote Monster headphones in music videos for Universal artists, from Nicki Minaj to Maroon 5. Bono, who has a version of Beats by Dre that benefits his Product Red Group, presented a pair to Jon Stewart when he visited his show last month.

50 Cent says the celebrity attachment to headphones helps give the product an identity.

“The generic public is responding to products associated with living people. When you say Bose or Sony, I think of buildings. It’s a corporation, it’s not a person associated with it that has respect within hip-hop culture or pop culture,’’ he said.

But unlike Universal, the other major labels ― Sony, EMI and Warner ― have yet to really use their rosters to promote headphones. Noblecilla of Sony wouldn’t comment on whether the company had plans to do so, but said people buy their headphones for the “style and the quality that we provide.’’