Talking to director Min Yong-keun is as if listening to a late night radio show. The calm, eloquent man knows how to talk about the stuff he loves, without boring the listener.

And it’s not surprising to find out he used to be an avid radio listener as a child, and an ardent fan of late folk rock singer and radio DJ Kim Kwang-seok. “I bought the cassette tape of his band ‘Dongmulwon’ (meaning the Zoo)’s first album when I was in the sixth grade,” the 35-year-old told The Korea Herald on Friday in Sangsoo-dong, Seoul. “None of my friends would listen to such folk music. But I really felt some connection to them. And purchasing those music cassette tapes had been my only hobby throughout my teenage years.”

The director, who is considered one of the heavyweight rookies in the Korean indie cinema scene ― along with “Bleak Night” auteur Yoon Sung-hyun and “The Journals of Musan” maker Park Jung-bum ― made a successful feature debut last year with his reflective yet suspenseful drama “Re-encounter.”

Telling a story of Hye-hwa (Yoo Da-in), a motherly young woman who works as a rescuer of abandoned animals who all of the sudden runs into her long-time ex with shocking news, the movie deftly deals with themes on teen pregnancy, fractured families as well as reconciliation with one’s painful past.

Min first got the idea for the plot of the film seven years ago, when he was working as a crew member for a TV documentary show featuring people with rare professions. “At the time we featured a woman in her 30s who worked as an animal rescuer,” Min told The Korea Herald. “She broke down to tears one day after failing to rescue one of the injured dogs. She said, ‘All I really want is to help them, but they just won’t realize it.’ I felt like she wasn’t just crying for the dog. It felt like there was something more. And I began to imagine the possible reasons behind her tears.” 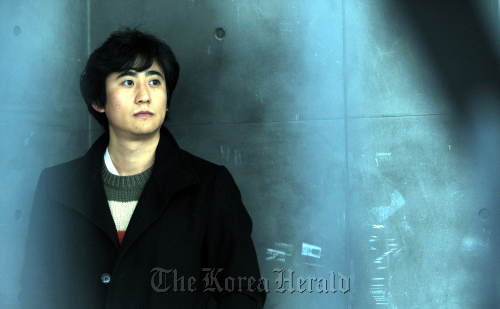 Director Min Yong-keun poses for a photo in Seoul, Monday. (Ahn Hoon/The Korea Herald)
Working as a crew member for a TV documentary inspired him in many ways, and what he learned then still is a great help nowadays. “First of all I got to meet all kinds of people, and that was a huge plus to begin with,” he said. “The second thing was the editing. Each episode of the TV documentary had to be 50 minutes long, and we had no other choice. So we’d have to mercilessly cut a lot of footage. But there’s beauty in such kind of editing. I often watched the show’s yet-to-be completed versions without the narrations. The sequences were very concise and almost poetic.”

And Min traces the sentimental roots of his debut film in the ‘80s Korean folk music he used to listen to as a child. His favorite artists were Jang Pil-soon, Cho Dong-jin, and of course, Kim Kwang-seok and his band Dongmulwon. He’d also very often listened to Kim Gwang-seok’s radio show “By the Night Window” on BBS while attending middle school.

“There’s a song called “the Zoo” on Dongmulwon’s second album,” he said. “Most people would think of the children or something vibrant upon hearing the word. But the song is in fact very dreary and lonesome. It’s as if you are alone in the empty zoo on a winter day. The song has a few silent pauses in between, and I liked that flow. And I see that bleak sentiment in ‘Re-encounter’ as well.”

Having a large age gap with his older siblings, Min said he was used to being alone at home as a child. Aside from listening to music, reading was what kept him occupied while being alone. “One of my two older sisters majored in creative writing in university when I was a middle school kid, so there were a lot of books at home,” he said. “I started off with reading Haruki Murakami and Jang Jeong-il, and the collection of Yi Sang Literary Award-winning short fictions.”

Min currently writes columns on film for one of the local dailies here, the Hankyoreh. His all time favorite author now is American short story writer and poet Raymond Carver. “I like his simple, concise sentences,” he said. “It’s fascinating to see those simple sentences becoming something powerful when they are stored together.”

Min is famous for keeping his own clipped nails. The nail pieces appeared as Hye-hwa’s in “Re-encounter,” symbolizing the lost time between the protagonist and her ex. “I’ve been doing it since I was 20 years old,” he said. “At one point I felt like it was not right to simply throw them away. I’ve been doing it in a way to remember the time that’s being passed as you clip them away.”

The long-time bike rider is also known for his “visiting movie talks,” where he’d join with about 10 viewers for a talk after the film screening at a bar or a cafe. “You just have to request via Twitter,” Min said. “And if you let me know where your group is gathering after watching the film, I’d show up at the place and talk about the movie. One of the best reviews I received about the film in fact came from those visiting movie talks.

While “Re-encounter” showed much of Min’s own personal qualities ― reflective and detail-oriented ― he said he wants to do something quite different for his next film. “The best review I received was from this middle aged woman whom I met during one of the visiting talk sessions in Gwangju,” he said. “She told me that she saw too much of the director in the film, and it’d be nice to see me breaking away from my personal style and do something totally different. And I agreed. I think It’d be a crucial step for me to do that to extend my career as a director.”