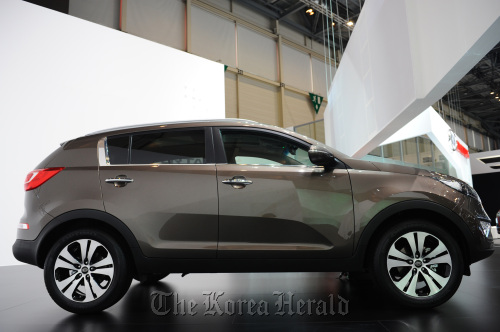 79.5 percent of which were small or medium-size cars. The company’s sales rose to 620,372 units in 2010, but the proportion of small and medium-size vehicles dropped 3.7 percentage points to 75.8 percent.

Sales of small and medium-size vehicles further shrank in the first 11 months of last year to 70.5 percent out of 642,449 vehicles sold during the cited period, meaning the company is selling more large vehicles, the observers noted.

The group includes Hyundai Motor Co., the maker of the Sonata sold as the i40 in Europe, and Kia Motors Corp., the manufacturers of the award-winning K7 sedan sold as the Cadenza in the European market.

A group official said the sales of large vehicles will help improve the group’s profitability.

“The Tucson ix (sold as the ix35 in Europe) and the Sportage R, both produced at our European plant, led the sales increase,” the official said. “We expect sales of large vehicles to further increase with the launch of the K5 early this year, also raising our profitability.”