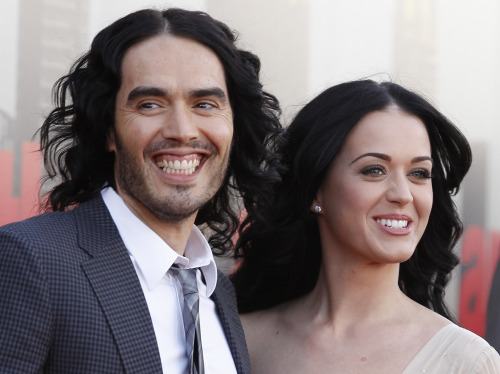 British actor Russell Brand and his wife Katy Perry arrive for the European premiere of “Arthur,” in London in April. (AP-Yonhap News)
LOS ANGELES (AP) ― Russell Brand is divorcing Katy Perry after 14 months of what appeared to be a storybook marriage.

“Sadly, Katy and I are ending our marriage,’’ Brand said in a statement released to The Associated Press. “I’ll always adore her and I know we’ll remain friends.’’

Brand, 36, offered no other details, but in papers filed in Los Angeles Superior Court, the British comedian cited irreconcilable differences.

He and the 27-year-old pop singer were married in October 2010 at a resort inside a tiger reserve in India, and their mutual affection had become a rather sweet feature of the Hollywood celebrity circuit.

The couple announced their engagement in January 2010 after meeting at the 2009 MTV Video Music Awards, where Brand hosted and she performed.

The comedian, who once struggled with substance abuse and sex addiction, was effusive about his bride while promoting projects earlier this year, saying marrying Perry has “given me much more strength in what I do.’’

“For a long while, what I do professionally was all that mattered to me really,’’ he said in March. “Now I think, well, whatever I do, I’ll just go back to her, and that’s incredibly comforting.’’