“He is ‘The One,’’’ said Oprah Winfrey, his biggest and most influential celebrity champion.

Halle Berry said she’d “collect paper cups off the ground to make his pathway clear.’’ Black Eyed Peas frontman will.i.am chimed in with the famous “Yes We Can’’ video.

But you can’t be the Next Big Thing twice and as a new election year dawns, there’s clearly a different mood in heavily Democratic Hollywood.

That means less gushing, not to mention snippets of criticism, most prominently from actor Matt Damon, who campaigned for Obama last time but now makes no secret of his disillusionment.

“I think he misinterpreted his mandate,’’ Damon said earlier this year. He recently told Elle magazine the country would have been better off with a one-term president with guts, although he used a saltier word.

The adulation of the 2008 election may be significantly muted among Hollywood liberals, as with liberals elsewhere, but Obama’s supporters say that’s only natural, given the circumstances. Fundraisers there say that events have been selling out and there’s plenty of enthusiasm. 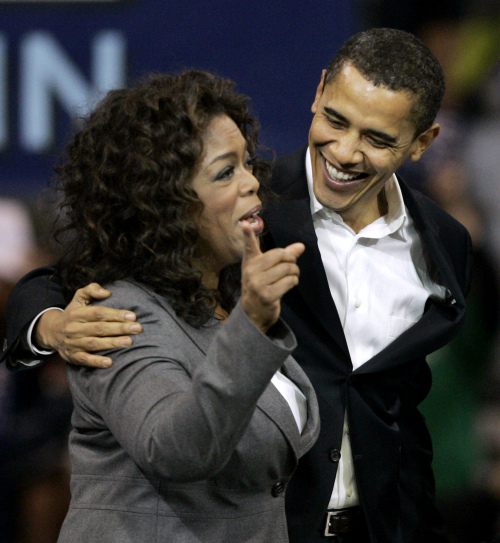 Barack Obama reacts as Oprah Winfrey introduces him to the crowd at a 2007 rally. (AP-Yonhap News)
They also say the nation has focused on the Republican race to pick a challenger to Obama and that once that choice is made, the Democratic base will become energized.

“The moment the Republicans have their nominee is when you’re going to see anyone still on the fence jump in,’’ says Chad Griffin, a Los Angeles-based communications strategist and Democratic fundraiser. “Once you have a head-to-head matchup, the contrast will be grand.’’

Numbers compiled by the nonpartisan Center for Responsive Politics show that while overall political contributions were up in Hollywood for the first three-quarters of this year compared with the same period four years ago, contributions to Democrats were slightly down.