Never before has Spielberg faced such formidable competition.

Studios usually scramble to avoid scheduling big pictures head-to-head. But in a recent phone conversation, an upbeat Spielberg said he was delighted at the parallel premieres and unconcerned that he might be cannibalizing his audience.

“Hey, you know something? I’m blessed that this year I’ve been able to have two movies come out. I’m so happy that both these movies are coming out during the family movie-going season. I’m not thinking ahead to anything else. I never do. I’ve never ever held out expectations beyond hoping that the films do well.”

He’s done well, with two best-director Oscars (for “Schindler’s List” and “Saving Private Ryan”) and a career box-office gross of $6 billion and counting. His bankability is seen again this month, with production budgets of $70 million for “War Horse” and $130 million for “Tintin.” In an industry where egos loom large, the 64-year-old Spielberg is exceptionally unaffected. Whether he’s discussing Peter (“Lord of the Rings”) Jackson, who produced “Tintin,” or animal trainer Bobby Lovgren, who worked with the equine performers on “War Horse,” the filmmaker makes it sound as if he’s just lucky to have such talented teammates. 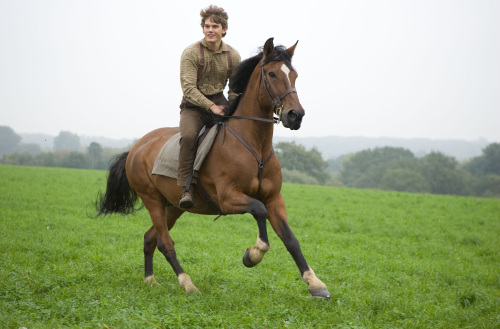 Albert Narracott (Jeremy Irvine) joyfully rides atop his beloved horse, Joey in DreamWorks Pictures’ “War Horse,” director Steven Spielberg’s epic adventure and an unforgettable odyssey through courage, friendship, discovery and wonder. (DreamWorks Pictures/MCT)
Spielberg, who set the pattern for the modern studio blockbuster with “Jaws,” even had kind words for the animals.

“The horses were brilliant, and the trainers were the reason they were so brilliant. Bobby and his entire team of horse whisperers did the most amazing job of getting the script needs and my needs to the animals, who not only performed what they were supposed to perform, they were improvising all the time and we got things we never expected a horse can do on film,” he said. “It’s harder to work with a mechanical shark, of course. Because a live horse actually listens to me.”

“War Horse” presented logistical challenges, from the animal cast (up to 280 horses were used in a single scene) to the ever-changing clouds and light above the English moors. Spielberg was determined to shoot a key scene in the rain ― “not Hollywood rain but real rain” ― and the weather was uncooperative.

For “Tintin,” he faced another series of hurdles. The technical questions involved in motion-capture animation were familiar enough. The real trick was creating a franchise around a 70-year-old Belgian cartoon character. The Smurfs crossed the Atlantic successfully, but Tintin has had a tough time cracking the U.S. market. Many American moviegoers don’t know Tintin from Rin Tin Tin, the soulful German shepherd.

Georges Remi, better known as Herge, wrote and drew 23 adventures for his boy reporter between 1929 and 1976. The series has been a Harry Potter-level phenomenon around the world for decades, selling some 200 million copies. Yet outside high-end bookstores, Spielberg admitted, it has remained obscure here. Spielberg himself didn’t discover Tintin until 1980 or so, he recalled, and read the series to each of his six children in turn. The series, with its dynamic visuals and colorful characters, instantly struck Spielberg as movie material, and he snapped up the rights back in 1983. Adapting it was the trick.

“I wanted this to be classic Herge, faithful to the man who invented and sustained Tintin for all those years,” he said. And 30 years ago, that would have been tough to achieve. “I didn’t want it to be live action. I knew that if I dressed up actors in those costumes it’d be a very eccentric live-action film. Very eccentric costumes and very eccentric hair styles. I didn’t want it to be ‘Baron Munchausen,’ if you know what I mean, with overstylized looks for all the characters. So that choice was made pretty early to animate Tintin. Animation was a closer medium to Herge’s art. It would be the best way to translate Herge to audiences around the world.”

It took three decades for performance-capture technology to reach the high water mark Spielberg knew the project required. While “Avatar” was still in production, he hired that film’s special-effects wizards to swing over to his film next. “I was very fortunate to have those same animators.”

The film travels from the sea to the Sahara and back again, a journey chockablock with the extravagant action sequences that are Spielberg’s signature. Those pages of the script were simply left blank. “It just said me and Peter Jackson will eventually figure this out. They were left to our own crazy devices.”

Jackson collaborated with Spielberg by video link. “He had to get up at 3 o’clock in the morning in New Zealand just to show up for 8 a.m. set call in Los Angeles.” Time difference notwithstanding, “he worked hard on 25 drafts of the script, and offered a continual stream of suggestions throughout the shoot.”