WASHINGTON (AP) _ Almost two centuries before there was a man named Obama in the White House, there was a man named Obama shackled in the bowels of a slave ship. There is no proof that the unidentified Obama has ties to President Barack Obama. All they share is a name. But that is exactly the commonality that Emory University researchers hope to build upon as they delve into the origins of Africans who were taken up and sold. 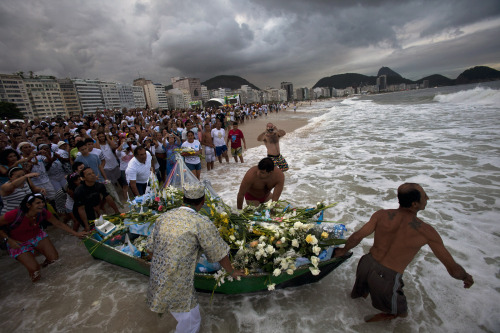 Faithful push a boat filled with flowers into the waters of Copacabana beach as an offering for Yemanja, goddess of the sea, in Rio de Janeiro, Brazil, Thursday Dec. 29, 2011. (AP-Yonhap News)
They have built an online database around those names, and welcome input from people who may share a name that's in the database, or have such names as part of their family lore.

``The whole point of the project is to ask the African diaspora, people with any African background, to help us identify the names because the names are so ethno-linguistically specific, we can actually locate the region in Africa to which the individual belonged on the basis of the name,'' said David Eltis, an Emory University history professor who heads the database research team.

So far, two men named Obama sit among some 9,500 captured Africans whose names were written on line after line in the registries of obscure, 19th century slave trafficking courts. The courts processed the human chattel freed from ships that were intercepted and detoured to Havana, Cuba or Freetown, Sierra Leone. Most of the millions of Africans enslaved before 1807 were known only by numbers, said James Walvin, an expert on the trans-Atlantic slave trade. Once bought by slave owners, the Africans' names were lost. Africans captured by the Portuguese were baptized and given ``Christian'' names aboard the ships that were taking them into slavery.

But original African names _ surnames were uncommon for Africans in the 19th century _ are rich with information. Some reveal the day of the week an individual was born or whether that individual was the oldest, youngest or middle child or a twin. They can also reveal ethnic or linguistic groups.

The president's father was from Kenya, on the eastern coast of Africa, and Eltis said it was rare for captives to hail from areas far from the port where their ships set sail. The unidentified Obamas on the slave ships sailed from west Africa. Walvin, author of ``The Zong,'' a book about the slave trade, said there were Africans who had been brought great distances before they were forced onto ships.

``Often their enslavement had begun much earlier, deep in the African interior, most of them captured through acts of violence, warfare or kidnap, or for criminal activity ...'' Walvin said in his book, which chronicles the true story of a captain who ordered a third of the slaves aboard his ship thrown overboard due to a shortage of drinking water.

Obama's ancestors, a nomadic people known as the River Lake Nilotes, migrated from Bahr-el-Ghazal Province in Sudan toward Uganda and into Western Kenya, according to Sally Jacobs, author of ``The Other Barack'', a book about the president's father. They were part of several clans and subclans that eventually became the Luo people of Kenya, Jacobs writes.

The president's great-grandfather's name was Obama. Obama is derived from the word ``bam'', meaning crooked or indirect, she said in her book.

But it's also possible that Obama was a name used by other cultural groups in Africa and for whom the name had a different meaning.

The slaves found aboard intercepted ships provided their names, age and sometimes where they were from, through translators, to English and Spanish speaking court registrars who wrote their names as they sounded to them.

Body scars or identifying marks also were recorded. The details were logged in an attempt to prevent the Africans from being enslaved again, which didn't always work.

Emory's researchers are including audio clips of the names as they would likely be pronounced in Africa.

``These people enslaved were not just a nebulous group of people with no place and no name,'' said Kwesi DeGraft-Hanson, one of the researchers, who has found variations of his name, his brother's and his children's names in the database. He is originally from Ghana. ``That's how lot of us view slavery. We don't have names faces to go with it ... It makes them that much more removed from us.''

Eltis and his researchers acknowledge the database may not help African Americans with genealogical research because records on the Africans once they were freed from the ships are harder to find, if they exist at all.

However, the project provides another piece in a major jigsaw, and helps put together a bigger picture on slavery, Walvin said.

Before this project, Eltis and others assembled a database of 35,000 trans-Atlantic slave ship voyages responsible for the flow of more than 10 million Africans to the Americas.

Together, the two databases provide some details on the horrific voyages of the Africans, including the Obamas.

The Xerxes, which carried one of the unidentified Obamas, was a 138-foot (42-meter) schooner that began its voyage in Havana with a crew of 44. Five guns were mounted aboard when the ship left on a slave purchasing trip to Bonny on Feb. 10, 1828.

Sailing under the Spanish flag, the ship's captain Felipe Rebel purchased 429 slaves, nearly one third of them children, before setting out on a return trip to the Americas. But on June 26, 1828, the Xerxes was intercepted and forced to dock at an unknown Cuban port. By then, 26 slaves had died.

The other unidentified Obama, 6-foot-3-inches (1.9 meters) tall, was one of 562 Africans shackled in the belly of the Midas. The vessel was a Brig, a fast, maneuverable ship with two square-rigged masts. It was equipped with eight guns.

Midas' captain J. Martinez and a crew of 53 left Cuba on an unknown date. It left Bonny with 562 slaves but was intercepted. It docked in Cuba July 8, 1829 minus 162 slaves who had died during the voyage.

Some slaves freed from seized ships were returned to Africa, but not always to their original homelands. Some were sent to Liberia or were allowed to remain free in the cities where the courts were located. Some may have been re-enslaved and some died on ships that were returning them to Africa.