[ The Korea Herald – Send E-mail ]
Abstract painter Helen Frankenthaler dies at 83
By Shin Hae-in
Published : Dec 28, 2011 - 20:10
Updated : Dec 28, 2011 - 20:10
NEW YORK (AP) ― Helen Frankenthaler, an abstract painter known for her bold, lyrical use of color who led a postwar art movement that would later be termed Color Field painting, died Tuesday at her home in Connecticut, her nephew said. She was 83.

One of Frankenthaler’s most famous works is “Mountains and Sea,” a 1952 painting at the National Gallery of Art in Washington, D.C., which she created by pouring thinned paint directly onto raw, unprimed canvas laid on the studio floor. 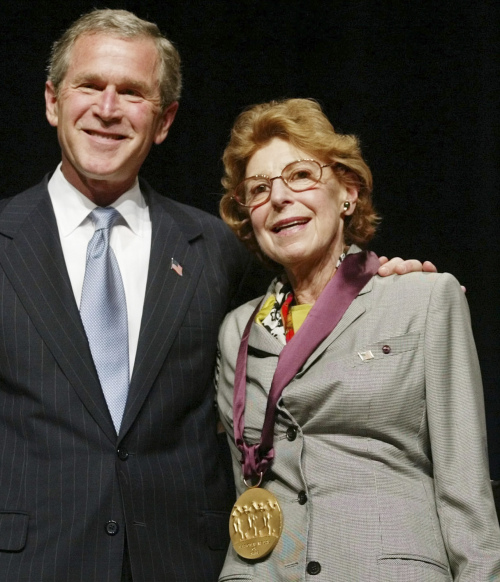 Her abstract style helped American art make the transition from Abstract Expressionism to Color Field painting and influenced such artists as Morris Louis and Kenneth Noland.

“Very few artists are able to develop a vocabulary and create an aesthetic that affects other artists deeply,” said Ross. “She was the one who transmitted a certain kind of freedom and boldness use of the subconscious and impulse from the Abstract Expressionists on through the Color Field painters.”

Frankenthaler was born on Dec. 12, 1928, on New York’s Upper East Side and got her bachelor’s degree from Bennington College in Vermont, where she studied with Paul Feely. She studied at Columbia University in New York and took painting classes with Vaclav Vytlacil at the Art Students League and also with Hans Hofmann.

She was only 23 when she created “Mountains and Sea,” building on Jackson Pollock’s abstract technique by pouring highly thinned oil paint from coffee cans directly onto the raw canvas to create floating fields of translucent color. Louis later said “Mountains and Sea” was “the bridge between Pollock and what was possible.”

Her first solo exhibition was presented in 1951 at New York’s Tibor de Nagy Gallery, and she was also included that year in the landmark exhibition “9th Street: Exhibition of Painting and Sculpture.” Frankenthaler also showed internationally, exhibiting at the International Biennial of Art in Venice in 1966 and in the United States Pavilion at Expo in Montreal in 1967.

Frankenthaler went on to develop a highly personal painterly manner within the abstract expressionist movement.