Even as the Dutch government hardens its famous tolerance policy on marijuana, it is taking an increasingly relaxed stance toward tobacco, bucking the trend in nearly every other developed country.

Last year it exempted some bars from a smoking ban and now it has unveiled plans to reduce spending on anti-smoking advertising campaigns and end funding for health care programs to help people kick the habit. The Netherlands is also planning to cease funding its national center on tobacco control.

Nearly half of the nation’s bars and nightclubs flout the 2008 smoking ban but they’re rarely punished.

At a press briefing on Wednesday, several Dutch politicians and experts blasted the government for backtracking on tobacco control policies. Opposition lawmaker Renske Leijten of the Socialist Party said Health Minister Edith Schippers was making the wrong decision to cut back on quit smoking policies.

“You can even wonder if she is minister of health or minister for the tobacco industry,” she said.

Schippers said she believes in freedom of choice for smokers and that the government has “gone too far in making rules about it.” 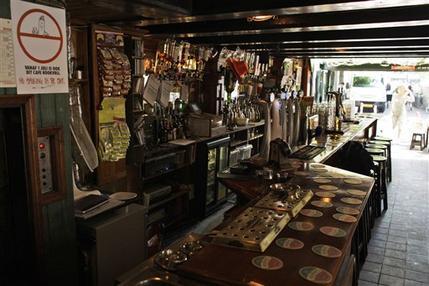 A July 2008 file photo showing a no-smoking sign in an empty bar in central Amsterdam, Netherlands.(AP-Yonhap News)
Inge Freriksen, a health ministry spokeswoman, told the Associated Press the Netherlands had chosen “a different manner of prevention” - one that focuses on educating children on the dangers of smoking.

The Netherlands is home to Europe’s biggest tobacco industry and also has Philip Morris’ largest factory worldwide. Some experts have suggested possible improper links between the Dutch government and Dutch tobacco that account for the changes.

In a recent documentary on Dutch television, tobacco lobbyist Alexander van Voorst Vader said he knew Schippers when she served in Dutch Parliament and held numerous discussions with her. “She was very open (to) sensible points of view of the industry,” he said.

Any communication where the tobacco industry might influence government policies is strictly forbidden by the World Health Organization’s international tobacco control treaty, which the Netherlands signed in 2005.

Health ministry spokeswoman Freriksen said any communication government officials had with the tobacco industry was legitimate. “It’s not forbidden to have communication with tobacco companies in a normal manner about enforcement,” she said. “You do talk with them.”

The WHO tobacco control treaty obliges signatory nations to introduce strong tobacco control measures including increased legislation, taxation and education. But like most global treaties, there are no real measures to punish countries that don’t comply.

According to the Netherlands’ National Organization for Tobacco Trade, Dutch consumers bought more than 4 billion euros ($5 billion) worth of tobacco products last year. About 27 percent of people in the Netherlands smoke, slightly higher than other rich countries including Britain and the U.S.

According to the International Agency for Research on Cancer, the Netherlands has a lung cancer rate of about 93 people per 100,000, higher than the average in Western Europe, including Austria, France and Germany.

Earlier this year, Dutch researchers predicted that without stronger anti-smoking policies, almost a million people in the Netherlands would die prematurely due to tobacco-related diseases between now and 2040.

By 2020, they estimated smoking-related diseases would kill 600 additional people as a result of the government’s decision to stop paying for quit smoking programs and ending mass education campaigns.

Schippers argued in a letter to Parliament that the projection was “partially dependent on assumptions.”

The government’s liberal stance toward tobacco contrasts strongly with its moves to curtail the country’s famous tolerance policy toward marijuana: the government is reducing the number of cafes licensed to sell the drug and plans to introduce a pass system next year that would bar tourists from buying it at all.

Critics argue the Dutch population is woefully ignorant of the dangers of tobacco. In a global survey on smokers’ awareness, only 61 percent of Dutch smokers agreed second-hand smoke was dangerous to non-smokers - much lower than smokers elsewhere, including Mauritius, China, Brazil and Mexico.

“Dutch smokers are among the least informed about the harms of smoking and second-hand smoke,” said Geoff Fong, at the University of Waterloo in Canada, who heads a program that monitors smoking policies worldwide.

“The Dutch are heading into a situation where their tobacco control could be worse than many developing countries,” he said.

Last year, the government declared that small, owner-operated bars without employees would be exempt from the smoking ban.

Ex-smoker Eddie Moojen quit smoking four months ago on his own and says he isn’t worried about second-hand smoke.

“We had dinner the other night at a cafe where they smoke, it doesn’t make that much difference,” said Moojen, 39, founder of Opentracker, a software company in the southern city of Eindhoven. “I’m not uptight about smokers bothering non-smokers.”