Song, who recently won the first film award of her acting career for her role as the grieving filmmaker in this year’s somber drama “A Reason to Live,” will star as a wealthy, driven woman in Shanghai who lives through the end of WWII and Chinese Civil War. Song will act in Mandarin for the film.

Woo, whose best-known works include 2008 Chinese epic war film “Red Cliff” and “Mission: Impossible 2,” has been preparing for the upcoming film along with popular film producer Terence Chang in the last two years.

The upcoming film, whose working title has been “Pacific Round of 1949,”will also star Chinese heavyweights Zhang Ziyi and Chang Chen. 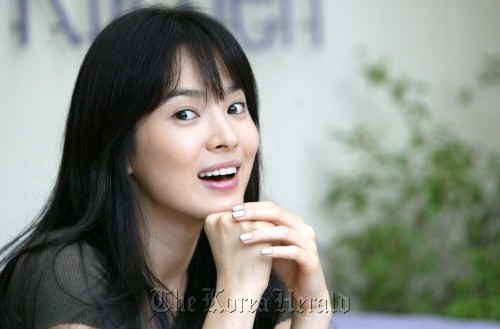 Actress Song Hye-kyo (The Korea Herald)
Song, who rose to stardom with 2000 KBS TV drama “Autumn In My Heart,” made her silver screen debut in 2005 with “My Girl and I.” She participated in a total of six films so far, including Korean-American filmmaker Son Soo-peom’s 2008 indie debut “Fetish,” and Hong Kong-based filmmaker Wong Kar-wai’s upcoming action drama “The Grandmasters.”

The shooting of “Love and Let Love” will start early next month in Shanghai and Taiwan, according to Song’s agency.