This is the seventh in a series on up-and-coming Korean filmmakers. ― Ed.

Sitting over coffee in her own production house, director and CEO Lee Young-mi looks more like the latter.

Dressed in a black suit with her wavy hair down to her shoulders, Lee’s demure presence and eloquent, deep-voiced speech calls to mind a high-profile business woman.

It is fascinating to hear Lee say she likes to expose secrets and that the biggest secret anyone can have is their “sexual appetite.”

“I’ve always been fascinated by secrets, ever since I was really young,” the 45-year-old told The Korea Herald on Thursday.

“Most of it had to do with teachers. I always felt like they were hiding something, and that I was not stupid just because I was a child.”

Lee recalls her younger self as an extremely sensitive child who would easily get hurt by trivial matters. Though she had always wanted to make films, she pursued a degree at what is now the Human Ecology College of Seoul National University. It was at 28 that Lee made her career change.

“I felt like I was going to die if I didn’t do it then,” she said. “I thought, ‘you only get to live once, and why not go for it?’ I think it was the best decision I’ve ever made in my life.” 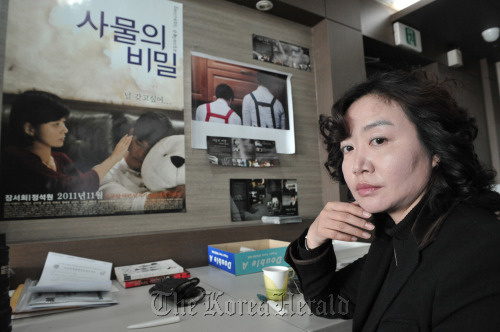 Director Lee Young-mi poses in the office of her production company, Film Front, in Seoul, Friday. (Chung Hee-cho/The Korea Herald)
After attending Hanyang University’s film program for two years, Lee went abroad in 1995 to study at Britain’s National Film and Television school. She made a total of eight shorts ― many of which were invited to international film festivals ― during the five-year program. She was also participated a crew member for the production of British romantic-comedy “Notting Hill.”

Almost all of Lee’s student films dealt with her long-time interests: secrets and repressed desire. Her protagonists include a cab driver who realizes she is a lesbian, and a music composer who discovers his hidden libido while writing music.

“I am all about Dr. Jekyll and Mr. Hyde,” Lee said. “I’ve been always interested in moments when people discover something shocking but true about themselves. Very often we are not aware of our own secrets and desires. It could be a sudden impulse to hurt someone, or do something totally crazy beyond our common sense.”

In the movie, the story of the two characters is told by the narration of their two personal objects: the professor’s copying machine, and the young assistant’s digital camera. The 21-year-old, who comes from a broken family and keeps a number of painful secrets, repeatedly takes pictures of himself and deletes them instantly.

“The young male character is pretty much another version of me,” said Lee, who described herself as “vulnerable and emotional.”

“What he does with his camera reflects what I’ve been doing with the memories of my own experiences. I’d purposely try to forget the memories, just like the way he deletes the photos, in order to move on ― because it’s too painful for me to live with them.

“I have more attachment to the male character (than the female character), honestly speaking,” she continued. “In the end, I think the movie’s about his secrets. His secrets talk more to the universal human experience.”

Lee, who founded her Film Front production house on her birthday in 2008, created controversy last month by claiming that multi-screen cinema chains only provided about 28 venues for the movie out of the 55 promised. Lee also expressed her bitterness with how her movie was forced to share a screen with other films, instead of theaters dedicating a screen to showing it exclusively.

“I feel like the movie was never really released, frankly speaking,” Lee said. “I am calling for strict regulations on matters like these.”

A huge fan of Bertolucci’s 1970 political drama “The Conformist” and Jean-Pierre Melville’s 1967 French crime thriller “Le Samourai,” Lee said she is planning to make a noir thriller which evokes the contemporary world where human loneliness is one of its inevitable consequences.

Asked about what she would never compromise on while making her future films, Lee answered with one word.

“Genuineness,” she said. “I think the word explains everything.”