[ The Korea Herald – Send E-mail ]
Tilda Swinton needs to talk about ‘Kevin’
By Korea Herald
Published : Dec 13, 2011 - 19:31
Updated : Dec 13, 2011 - 19:31
NEW YORK ― If you search online for photos of Tilda Swinton, you’ll find one, from the 2008 Academy Awards, that particularly delights the actress. She won the supporting-actress award that night for playing a squirmy lawyer in “Michael Clayton,” but that’s not why Swinton ebulliently brings up this photo of her and a young mystery man.

“I was with the Coens (directors Ethan and Joel) and Fran McDormand. Their son (Pedro) was with them. Pedro and I were standing together. There were some photographers there. I put my arm around him, and we had some photographs,” says Swinton. “If anyone mentions my son, this photograph of Pedro is brought out.”

She pauses for effect and gestures to her own ivory complexion and carroty crop. “How did that happen?” wonders Swinton, herself the mother of twins Honor and Xavier, 14, who have never been to an awards show. “Pedro is incredibly good-looking, of South American descent. My son could not possibly look less like him. Pedro is his stand-in.”

On this drizzly winter day, Swinton’s kids, whom she has kept so removed from her day job that not a single picture seems to publicly exist of them, are home in Scotland with their father, artist John Byrne. Swinton, meanwhile, is globe-trotting to promote her newest film, “We Need to Talk About Kevin,” accompanied by her boyfriend, Sandro Kopp. With her alabaster skin and slender, rangy frame, there’s something otherworldly, almost celestial, about Swinton. Yet her demeanor is earthy, straightforward and direct, punctuated by a hearty handshake and a gleeful grasp of, and appreciation for, the absurd.

“My sweetheart Sandro is a bit of a provocateur. We were in a shop yesterday. I was paying for something. I was talking to him and looked up and he was making this ridiculous face out of the window because there was a photographer there,” she says, smiling. “He said that every time he sees a photographer, he’ll make this face. So there will be this legend that Tilda Swinton’s sweetie-pie looks like a dangerous criminal.” 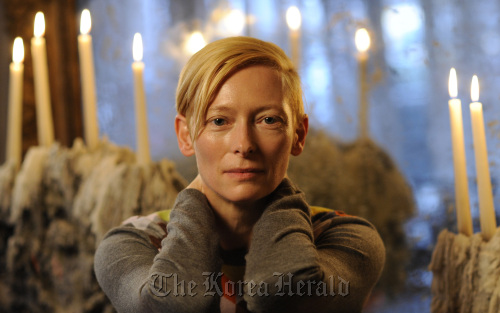 Tilda Swinton, pictured Nov. 16 in New York, stars in “We Need To Talk About Kevin.” (USA Today/MCT)
Dangerous and criminal. Those two words aptly sum up the protagonist in Swinton’s latest film, the jarring horror story “Kevin,” about a child who grows up to be a serial killer. The very definition of maternal love, what it means and what happens when it’s missing is the basis for the drama, based on a harrowing 2003 novel by Lionel Shriver.

The book is written entirely in flashback, in a series of letters that haunted mother Eva pens to her husband about the titular sociopath Kevin, who has gone on a killing bender. The performance just earned Swinton, 51, a National Board of Review award for best actress and has garnered Oscar buzz.

The movie is neither “social commentary” nor “social science,” cautions Swinton. “It’s phantasmagoria. It’s mainly about one woman’s mind. We don’t even know how much of this is true. It’s not about truth,” says Swinton. “It’s about her wallowing and drowning in a whole array of fantasy and memory.”

The role of Eva is hardly sympathetic, and the film plays as something of a horror story, ferreting out the unspeakable fears of expectant mothers: What if you don’t connect with or love your child? Swinton, who speaks of her twins with deep affection, was no different.

“I know there was this possibility. Somehow, my unconscious kept it from me while I was pregnant. Before I had children, I had assumed, like people do, that maternal instinct will kick in. You’ll give birth, and it will be about fluffy bunnies and bed jackets,” she says. “And a little bit of tiredness, but only the tiredness you had after parties. Not tiredness beyond anything you had imagined.”

Swinton will be the first to admit that raising children isn’t all unicorns and rainbows. But after giving birth, she realized that motherhood suited her.

“I remember noticing that I was really into them, that it was interesting to me and I was up for it. It could have gone the other way,” she says. “(The book) is about taking that corner of the liner on the floor and picking up and looking under there at all the grime and the cockroaches.”

In films, too, that’s Swinton’s preferred approach. Wes Anderson, who directed Swinton in the upcoming “Moonrise Kingdom,” calls her “one of those actors you just stand by waiting your turn hoping you have a chance to finally get her. She’s got about as wide a range as anybody could conceivably ever even dream of having.”

Swinton gravitates toward roles that can euphemistically be dubbed challenging. In 2001’s “The Deep End,” she’s a frantic, headstrong mother juggling blackmail, bank loans and school runs. In 2008’s “Julia,” she’s a debilitated drunk. And in 2009’s Italian saga “I Am Love,” she basks in her sexuality ― through succulent prawns ― and sees her family fall apart.

“Tilda isn’t afraid to play a character with an edge. She’s also a chameleon and a willing muse who will go to any lengths for her director if she believes in the project,” says “Kevin” director Lynne Ramsay.

If there’s any consistency to her choices, it’s incongruity. “Her work is smart and inventive, and it crosses the spectrum. She never seems to repeat herself, and she’s never the same,” says Michael Apted, who directed Swinton in last year’s “The Chronicles of Narnia: The Voyage of the Dawn Treader.”