[ The Korea Herald – Send E-mail ]
Leaders promise development partnership
By Korea Herald
Published : Nov 30, 2011 - 21:09
Updated : Dec 1, 2011 - 11:30
BUSAN ― Representatives of nations and international organizations at the world’s largest aid forum in Busan on Wednesday pledged to support the creation of a new global partnership for development cooperation and work at the national level.

Their pledge came in a statement finalized after the Fourth High Level Forum on Aid Effectiveness officially opened on Wednesday morning.

“We pledge our leadership for the implementation of Busan Partnership for Effective Development Cooperation ― the outcome document of this forum that establishes a new and inclusive global partnership for effective development cooperation.” 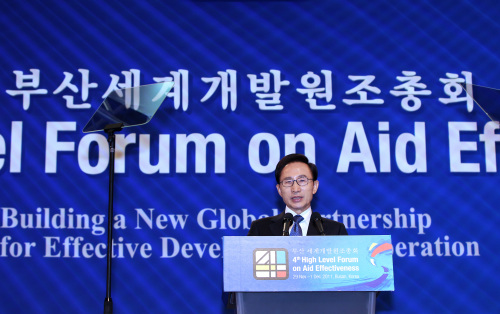 President Lee Myung-bak gives a speech at the Fourth High Level Forum on Aid Effectiveness in Busan on Wednesday. (Yonhap News)
“We will focus on implementing our respective actions at the country level and we will hold each other accountable,” the statement said.

In his opening address, Lee said that the Korean government would double its current level of official development assistance by 2015, despite domestic difficulties including job insecurity and youth unemployment.

“I would like to take this opportunity to reaffirm that the government of the Republic of Korea will fulfill its commitments,” Lee said.

He also said the 2008 financial crisis taught the globe that developing countries are vital partners for sustainable development and inclusive growth, and not merely recipients of assistance.

Ban urged traditional donor countries not to cut existing aid, even if their budgets are tight due to the global economic crisis.

Ban urged aid recipient countries to set clear development priorities and strategies, to enhance transparency and stamp out corruption. He added that they should put in place regulatory frameworks and incentives to generate private investment and entrepreneurship.

To a growing club of new and emerging countries, Ban’s message was to “step up.”

“ ... such success comes with responsibilities. This is your chance to assume your new leadership,” Ban said.

U.S. Secretary of State Hillary Clinton said aid donor countries should work together to ensure standards in human rights in developing countries where resources are abundant but poverty high.

Later in the day, Ban, Gurria and other officials attended a forum to promote the private sector’s role in international aid, as major economies including the U.S. and European Union find it more difficult to expand aid amid their economic downturns.

Participants in the Busan forum are scheduled to announce a final outcome document and close the event on Thursday.