The Hyundai Motor Group promoted division chiefs of the U.K and Middle East to country and regional head, in an HR strategy aimed at countering declining demand amid economic uncertainty in Europe.

Hyundai U.K.’s managing director Tony Whitehorn on Friday was made the president and CEO of Hyundai Motor U.K., making him the first chief of the country to advance to a head-position in the history of Hyundai Motor Europe. 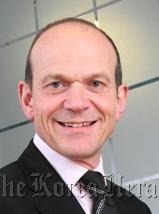 “The promotion from within company came before Hyundai’s usual reshuffle at the end of the year and such moves usually encourage managers as it rolls out aggressive marketing in Europe,” said Ahn Se-hwan, a motor analyst at IBK Securities.

Chung Mong-koo, the group’s chairman, ordered an aggressive expansion strategy with new vehicles during his September tour of Europe across Czech Republic and Germany.

The reform is said to have been necessary to push for more growth in Europe where consumers are tightening their belts under the financial crisis.

“Promotion within the organization stimulates manager-level for better performance. We expect the U.K. branch to post higher growth next year,” an official at Hyundai said in Seoul.

Operating in six countries ― Britain, Italy, Spain, Czech Republic, Norway and Poland ― Hyundai sales corporations captured 2.9 percent of the European car market for the first 10 months of this year, up 0.4 percentage point from the same period in 2010. Hyundai and Kia want to sell 698,000 units in Europe this year, up 12.4 percent from 2010.

Signs of declining demand are emerging, however.

Hyundai Motor India, which exports cars to 150 countries, says sluggish consumer sentiment brought down its sales to Europe to 45 percent of its total exports, down from 55 percent two years ago. It expects a 6 percent drop in exports to Europe this year.

The group still posted 21 percent growth in profits in the third quarter this year, with net earnings of 1.91 trillion won. Its overseas sales volume is about four times larger than domestic sales.

The group said Hyundai Motor Europe will acquire a 70 percent stake in a German dealership company from Emil Frey, the second-largest dealer group in Europe, to secure sales network.

It also plans to take over a French dealer company from Emil Frey. Hyundai’s mid-sized wagon i40 and Kia’s newly launched Pride subcompact are being put forward to bolster its sales in Europe.

“We have invested an awful lot of money in advertising the i40 ― actually, our marketing spend on the i40 is more than any other Hyundai ever ― and that’s because we have said that we need a car designed in Europe for Europe,” Whitehorn said in an interview.