The pig pen installation will undoubtedly be the most jaw-dropping event at the art fair. Known for photographing herself nude in subway tunnels or in front of graffiti walls, performance artist Miru Kim will be living with pigs for her performance “The Pig That Therefore I Am.”

“The immediate connection between pigs and me will be felt through seeing the living bodies mingle through skin,” Kim told The Associated Press. A glass barrier will act as “an insatiable gap between the spectacle and the onlooker, just like in a zoo.”

The international art fair, sister event to Art Basel in Switzerland, is celebrating its 10th year in South Florida this December. Miami’s art scene has grown tremendously since it started, and last year 46,000 people attended, not counting thousands more who took in ancillary events piggy-backing on the main arts-filled weekend. The trendy exhibits, films, parties and performances attract not just art collectors but also art-lovers of all means, tourists and many others who want to see and be seen.

“The cultural growth emerged about 20 years ago when the world discovered Miami through the lens of South Beach,” said Tony Goldman, chairman and CEO of The Goldman Properties Co., which has helped transform the city’s historic districts into thriving, trendy neighborhoods like South Beach and the Wynwood Arts District.

”Ten years ago when we brought Art Basel to Miami, we moved into warp speed and it’s been growing every year since,” the real estate investor said. 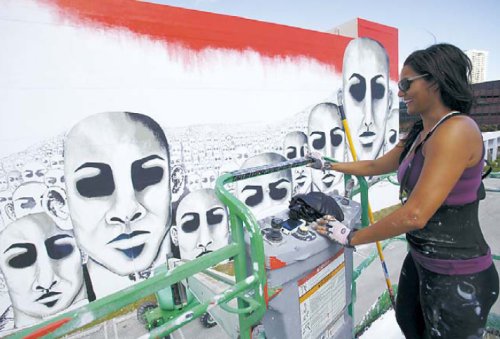 Wallscape artist Subi Roberto surveys her mural “We Are Lightwalkers” Tuesday in downtown Miami. (AP-Yonhap News)
Organizers for this year’s event are promising another round of great art, with thousands of works by more than 2,000 artists from around the world. Painting, drawing, sculpture, installation, print, photography, film, performance, video and digital art will all be on display at various venues, galleries, satellite fairs, outdoor exhibitions and private parties. New this year is Art Video, a 650-square-meter outdoor projection wall on the New World Center building designed by architect Frank Gehry.

The art experience will begin for many at Miami International Airport with Harmonic Convergence, a 22-meter-long window wall with diamond-shaped panes of glass in 150 transparent colors. The installation by architect and composer Christopher Janney creates a gradually changing pattern of colors, similar to a rainbow. It was installed a few months ago in an airport entrance by a people-mover walkway. Travelers will hear sounds Janney recorded during trips to the Florida Everglades, scuba dives in the ocean, and other natural environments. At the top of each hour, a short composition with percussion instruments plays, marking the time of day.

Images of art world stars Warhol and Robert Indiana taken in the early 1960s by photographer William John Kennedy will be on display for a pop-up event on the heels of Art Basel. “Before They Were Famous: Behind the Lens of William John Kennedy” will be part of the special programming at SCOPE Miami in the Wynwood Arts District.

“I photographed Andy and other Pop Artists because I believed they were creating something different,” Kennedy said. “Andy was completely devoted to his art. I’m sure at the time I photographed him, he believed the photos would become an important record of what he was trying to accomplish.”

The exhibit will include images of Warhol creating his Marilyn Monroe painting and Indiana holding his iconic LOVE piece, printed from original negatives as silver gelatin fiber prints.

SCOPE president and founder Alexis Hubshman said the photos offer a look at Warhol and Indiana “at a time when Americans were undergoing radical changes both politically and culturally.” He said the 1960s images present “a distinct reference point for many emerging and contemporary artists working today.”

Elsewhere in the Wynwood district, which is known for open-air museums of street murals, street artists will be “buffing” ― or painting over ― dozens of the neighborhood’s graffiti-clad walls. An organization called Primary Flight will help nearly 30 artists find walls to make art, and work by 16 artists will be on display at the organization’s gallery space.

The pig pen installation will be among the Primary Flight shows. “Some people are really going to love it. Some are going to be shocked. And a handful won’t really get it,” said Primary Flight founder Books Bischof.

For the first time, works by artists from the outdoor art park Wynwood Walls will be for sale at “Shop at the Walls,” its first pop-up gallery.

“Auctions like this only happen in New York and London,” Nader said.

Hundreds of volunteers will help lift a 6.1-meter sculptural platform with models of attractions from the 1939 New York World’s Fair for an installation by Los Angeles-based artist Glenn Kaino at Art Public.

Will Ryman’s “65th Street” installation of four colossal rose buds will bloom 6.1 meters over the Sagamore Hotel in Miami Beach. The pink and red buds, 1.5 to 3 meters in diameter, with a brass aphid and beetle nesting in the tallest bud, were recently in New York City. Ryman said Art Basel is “the perfect platform to introduce them to another extraordinary city of the arts, one that offers a completely different backdrop.”

Another side event, Design Miami, includes 28 galleries and explores the relationship between design and architecture, including furniture and lighting. One theme will be vintage and contemporary jewelry with pieces designed by sculptors Alexander Calder and Harry Bertoia. Design Miami also includes an installation of utopian architect Buckminster Fuller’s 1970s Fly’s Eye Dome alongside Lord Norman Foster’s reconstruction of Fuller’s Dymaxion car.

Art Miami, which predates Art Basel by a dozen years, will unfold in Wynwood with works by 1,000 artists including Henry Moore and Robert Rauschenberg, along with an installation by Finnish artist Kaarina Kaikkonen called “As A Tree, I Can Feel the Wind” consisting of palm trees strung with secondhand clothing.

Miami’s Mandarin Oriental hotel will show work by 16 contemporary Chinese artists reflecting ancient traditions as well as Western influence. Among the artists on display will be Liu Bolin, who uses himself as a blank canvas by painting his body to blend with the background.

Ten Steinway pianos decorated with art ranging from graffiti and acrylic paints to 3D sculptures will be scattered throughout Miami and South Beach for Pop-Up Pianos Miami. The pianos will eventually be donated to public schools and other organizations.