He also said that the government will pay particular attention to addressing concerns of farmers and mid- and small-sized business operators the expected to be affected by the pact.

He made the remarks during a meeting with related ministers, a day after the National Assembly approved the long-pending agreement with the ruling Grand National Party railroading it despite fierce objection from opposition parties.

Lee plans to sign the bill into law on Tuesday next week. Officials said they hoped the bill would take effect on Jan. 1 next year.

“Though (the ratification process) took four years and seven months (since it was signed), the period of time was a good opportunity for us to take a close look at what we failed to take care of,” he said during the meeting at Cheong Wa Dae.

“There are many concerns from farmers and small business operators. The government has already implemented measures for them, but we need to carefully review all issues including negative opinions, raised at the National Assembly.” 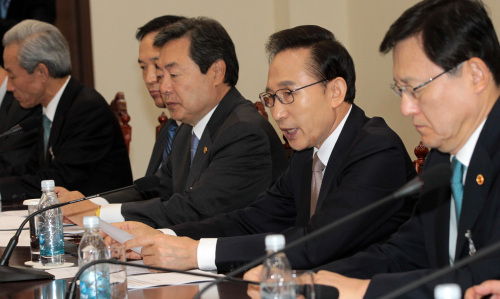 President Lee Myung-bak presides over a meeting of ministers at Cheong Wa Dae on Wednesday to discuss follow-up measures to the ratification of the Korea-U.S. Free Trade Agreement. (Yonhap News)
Lee particularly emphasized that the focus of government support should be on strengthening the competitiveness of the agricultural industry rather than on passive compensation for them.

“I hope we believe that it is our chance to strengthen the competitiveness of our agricultural industry. We can possibly become the world’s best in agriculture, why not?” he said.

“If we establish a firm foundation on which to help sharpen the competitiveness and support the industry, there is no reason that we cannot outperform Denmark or other European states.”

Lee also said that the country should move forward beyond the long-standing conflicts over the controversial deal, part of which opposition parties claimed should be renegotiated to protect local industries.

“Escalation of the conflict over the deal is not helpful for anybody now,” he said.

“At a time when the world economic woes are unabated, we have expanded our economic territory. We can create an opportunity to tide over the crisis and take a leap should we grab the chance to move a step ahead than other competitors.”

For Lee, the passage of the free trade pact with the U.S. offered him a big relief as it was one of his key economic priorities.

But as the main opposition Democratic party decided to boycott all parliamentary sessions, his government and the ruling party are expected to face big hurdles in passing a series of key bills including the 2012 state budget plan.

The Seoul government said that it would make the “utmost efforts” to effectuate it on Jan. 1 as the two governments have agreed. It claims that the pact would help boost the export-driven economy and further strengthen the Korea-U.S. alliance.