Korean mountaineering is in crisis after five climbers lost their lives in the Himalayas within a month, prompting calls for a change to the overheated competition in overseas expeditions.

In Oct. 17, veteran climber Park Young-seok and fellow climbers Gang Gi-seok and Shin Dong-min set out on the south face of Annapurna, aiming to push for the 8,091-meter summit. But they went missing after notifying the base camp they had encountered extreme conditions with rocks falling from the peak due to heavy snow.

Despite the Korean Alpine Federation’s rescue operation that continued for 10 days, they were nowhere to be seen. A special memorial service for the three missing climbers was held in Seoul earlier this month without their bodies.

Despair still lingering in the air, two other Korean mountaineers were found dead on Nov. 11 in the Himalayas. The leader of K2 Extreme team, Kim Hyung-il, and his colleague Chang Ji-myeong fell to their deaths while trying to summit the 6,440 m Cholatse. 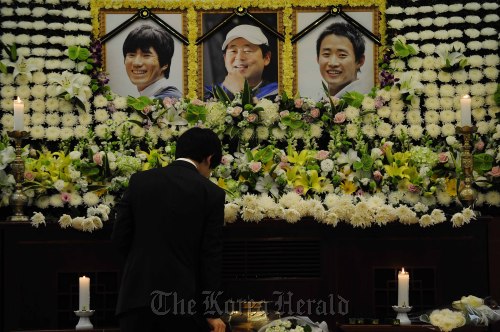 A memorial service for three missing climbers is held at Seoul National Hospital in Seoul on Nov. 3. (Park Hae-mook/The Korea Herald)
In light of the accidents, observers argue that it is time to change the country’s mountaineering culture.

“Too many people now go to the Himalayas,” said an experienced climber, Go Tae-woo.

Go, 49, who runs a climbing school in Seongnam, Gyeonggi Province, claimed that many climbers set out to climb the world’s most challenging peaks in order to obtain cooperate sponsorship.

“It’s really hard to find a sponsor unless you go to Mount Everest or other famous mountains,” Go said.

The problem, he added, is that climbers often become dependent on sponsors, sometimes setting almost impossible schedules to meet their expectations.

Climbing the world’s highest peaks certainly costs a lot. People who want to set out to climb Mt. Everest, for instance, must pay a minimum $10,000 each in fees to the Nepalese government. And in order to bring their equipment and food all the way to 8,848 m above sea level, it can cost a team around $260,000 to conquer Everest, according to an official from KAF.

Many renowned Korean climbers, including the late Park, who was sponsored by North Face, the outdoors supplier, are selected by businesses as stars to be admired by consumers.

Thanks to the corporate sponsorships, more climbers can afford to set out on overseas expeditions. But as more people attempt to reach the Himalayas, so too rises the number of casualties.

Since 1990, 20 years after climbing became commercial, more than 60 Koreans have lost their lives in the Himalayas ―- nine people went missing or were found dead in 2008-2010 alone.

Lee Eui-jae, secretary general of KAF, however, said the corporate help should not be blamed for the deaths.

“Korea is now considered one of the top mountaineering countries. If there had been no help from companies, we could not have reached this level,” Lee said.

Experienced mountaineer Nam Sun-woo from KAF agreed with Lee, noting that commercial climbing does not dilute the challenge and goal of climbers.

“Nobody can force them to risk their lives to reach the summit. In the end it’s up to them,” Nam said. He added the Korean mountaineering is now in a transition period.

“For a long-time we were focused only on how many peaks are climbed, rather than how they are climbed. But it’s beginning to change.”

He noted the late Park was trying to change the tradition of Korean climbing by attempting to carve a new route on the south face of Annapurna.

“He was a pioneer, so his loss is a terrible shock to us. But it shouldn’t discourage other climbers,” he added.