Im Sang-hyuk, 37, an oriental medicine doctor, has been cycling to work every day for the last eight years.

“It’s obviously cheaper, and I find it often faster,” he said.

Im commutes with his bike from his house in Sinjeong-dong, southwest Seoul to Jegi-dong, in the northern part of the city.

It’s a daunting 60 km round trip, but Im finds it enjoyable and reliable.

According to Im, the best thing about riding a bike is the freedom of not being enclosed in a train or car.

“I enjoy the scenery of the Han River, and it feels great riding with the sunset on my way home,” he said.

Cycling is experiencing a boom across the country, with an increasing number of people using bikes to get around.

More than 11 million people live in Seoul, and 2.8 percent of them now use their bicycles to get around, four times more than 10 years ago, according to research by the Korea Transport Institute.

Unlike driving, bicycling provides exercise and is better for the environment. A recent study showed that it saves a lot of money as well.

The study by the Korea Institute of Sport Science showed that if twice as many people made their short trips by a bike instead of a car, it would save about $1.65 billion a year.

“If we took short car trips off the road, we would eliminate 20 percent of parking problems, and provide 1.5 times faster travel time,” Kim Sang-hoon of KISS explained in the report. 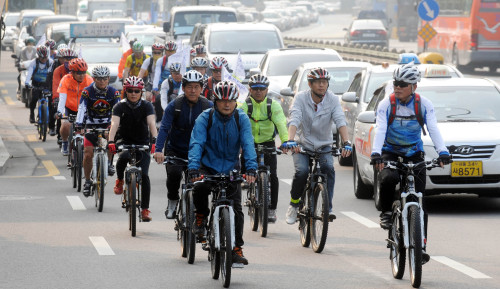 Commuters cycle in Seoul on Nov. 8. The Seoul Metropolitan Government launched last month the Seoul Bike Bus campaign, in which 10-15 bicyclists ride together on a designated lane. (Kim Myung-sub/The Korea Herald)
With the intangible benefits coupled with soaring petrol coasts, the government is trying to encourage communities to better support people on bikes.

The Ministry of Public Administration and Security announced earlier that it would complete a 2,175 km-long bicycle path network by 2019 with a 1.2 trillion won ($1 billon) investment. The Ministry already opened a new 440 km bike lane this year.

It will also connect smaller networks along four major rivers, including 378 km Nakdong River, to allow bikers to travel almost anywhere in the country.

“We’re not yet like Amsterdam, but there are signs over the past two years that more people in Korea are using bikes to get around,” Kim said.

But as more people decide to take their trips on two wheels instead of four, road-safety concerns are also increasing.

“By law, we can ride a bike on a road, but still motorists don’t like sharing it with cyclists,” said Lee So-hee from Korea Bicyclists Association.

Lee said the government needed to create more bike-friendly regulations to encourage more people to hop on a bicycle.

“You often see cars parked in a bike lane, and I had many hair-raising experiences as they don’t slow down when I pass by,” Lee said.

Meanwhile, there are also increasing calls for the government to enforce rules on cyclists. Currently, there is no restriction on cyclists riding without helmets and lights and also no speed limit for them on the streets.

There are more than 140 cycling accidents reported on the bike paths along the Han River every year.

“We advise cyclists to ride under 20 kph, but it’s difficult to control them, since there is no regulation,” said Kim Sang-hun, an official from the Seoul Metropolitan Government.

In light of the increasing concerns about road safety, the Ministry of Public Administration and Security recently announced its plan to revise regulations on traffic law.

According to the new plan, bicyclists must wear helmets and ride under 20 kph on roads. And motorists also must slow down to below 30 kph when they drive alongside bikes. The Ministry said it is planning to impose the rules as early as 2013.

But Shin Hee-cheol, a researcher at the Korea Transport Institute, said that overly strict rules can discourage people from hopping on a bike.

“People won’t like the idea of wearing helmets all the time, and it will be very difficult to control their speed as there is no speedometer on bikes,” Shin said.

He added that more educational programs are urgently needed to provide safe roads for both bicyclists and motorists.

“We need more explanation to the public on how to ride bikes on road, and we need to educate motorists and cyclists to have mutual respect for each other,” he added.