The vehicle, which shares the same external dimensions with the older model launched in October 2008, has a large radiator grill, aggressive head lamps and rear light combinations with liberal use of light emitting diode lights.

The car, shown for the first time at the Korea International Circuit in Yeongam, South Jeolla Province, comes with two types of engines that have greatly improved performance compared to the first generation coupe.

This represents a marked improvement of 65 horsepower and 8.0 kilogram-meters of torque from the original coupe. 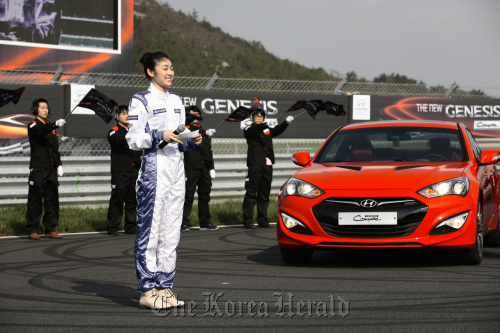 The fuel efficiency for the TCi has been established at 11.0 kilometers per liter of fuel, with the GDi-version standing at 10.3 kilometers using manual transmission.

The sales price of the new Genesis Coupe has been set between 26.20 million won ($23,260) to 37.45 million won with the carmaker expecting initial domestic sales to hit 4,000 units in 2012 when the car reaches consumers.