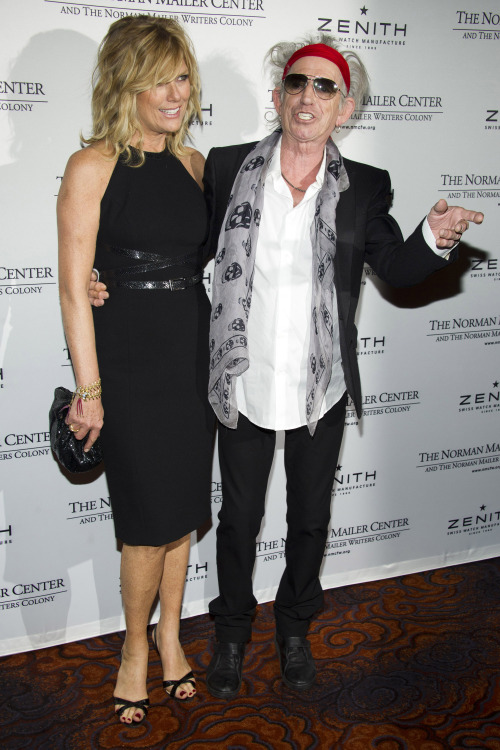 Honoree Keith Richards and his wife Patti Hansen attend the Norman Mailer Center and Writers Colony annual gala in New York, Tuesday. (AP-Yonhap News)
NEW YORK (AP) ― On a night he was honored for his way with words, Keith Richards was clearly winging it.

“This is one for the books, if you get my drift ― you hacks,” the 67-year-old Rolling Stones guitarist joked Tuesday as he accepted the Mailer Prize for Distinguished Biography, a prize earned by his million-selling memoir “Life.”

Wearing tinted glasses, a long scarf around his neck and a wide red band around his sprawl of salt and pepper hair, Richards stood before hundreds dressed in suits and gowns at the Mandarin Hotel in Manhattan and loosened up as if presiding over a celebrity roast. He chuckled. He swore. He reasoned that since he had been writing ― songs ― since age 16, his appearance at a literary event was not a total “intrusion.’’

It had been an evening of earnest speeches about the importance of writing and education, about the disparity of wealth and the lasting lessons of the Holocaust, the latter point articulated by Nobel laureate Elie Wiesel, winner of the Mailer prize for lifetime achievement.

“You’ve heard from some incredible people about some serious stuff,” Richards acknowledged, before bringing the subject to his own demons, his longtime heroin addiction. “The only serious stuff I’m interested in I’ve given up.”

The Mailer awards are named for writer Norman Mailer, who died in 2007, and are sponsored by the Norman Mailer Center and the Norman Mailer Writers Colony, based in his longtime home of Provincetown, Massachusetts. Previous recipients of Mailer awards, now in their third year, include Nobel laureates Toni Morrison and Orhan Pamuk and Rolling Stone magazine founder Jann Wenner.

Bill Clinton, who introduced Richards, was for once a supporting star. The former president called Richards “my friend” and “a good guy,” and repeatedly plugged “Life,” which was originally titled “My Life,” the same as Clinton’s memoir, until Richards decided it was best to get to the point and dispense with “My.” Clinton noted that his late mother-in-law, Dorothy Rodham, was an avid fan.

“Do you have any idea what it’s like to have a 92-year-old groupie living in your home, a woman who lived and breathed for the Rolling Stones?” Clinton said of Rodham, who died Nov. 1. He remembered attending a Stones concert a few years ago at the Beacon Theater in Manhattan, a show filmed for Martin Scorsese’s documentary “Shine a Light.” Rodham arrived early and stood in line just for the chance to see Richards, “to faint.”

Not long ago, Richards came to visit with Clinton and family in the Caribbean. He charmed Rodham, who changed her clothes just for the occasion, and made a point of kissing her hello and kissing her goodbye.

“What am I, chopped liver?” Clinton wondered as he recalled the star-struck mother of his wife, Secretary of State Hillary Rodham Clinton. “It was beautiful. He gives her an autographed copy of the book; she had already bought one on her own; she had already read it. I said, “Dorothy, what did you think?’ And she said, “I always did like those bad boys.’”

No Stones fan in the 1960s, or Richards, could have imagined a former president as his pal or that he would have been associated with the word “distinguished.” And few would have believed an encounter between Richards and Tony Bennett shortly before the ceremony. The 85-year-old Bennett, the kind of pop-jazz crooner the Stones displaced on the charts, approached Richards’ table and introduced himself. The two embraced, chatted and posed for pictures. Bennett later explained that Richards had sent him a nice note about his new album, “Duets II.”

“I just wanted to thank him,” Bennett said.

The gap has not entirely closed. Asked if he had any favorite Stones song, Bennett responded that he had never listened to them.