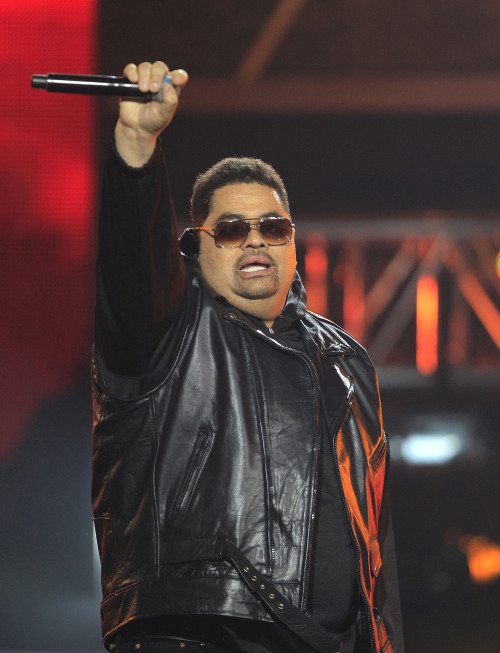 Rapper Heavy D, performs during the BET Hip Hop Awards in Atlanta on Oct. 1. (AP-Yonhap News)
LOS ANGELES (AP) ― Heavy D, the self-proclaimed “overweight lover” of hip-hop who became one of rap’s top hit-makers with wit, humor and a positive vibe, has died. He was 44.

Rosen said Beverly Hills police officers were dispatched to Heavy D’s condominium building Tuesday morning after receiving a report of an unconscious person laying on the walkway of a building. They found Heavy D was conscious and communicative but had difficulty breathing. He was transported to Cedars Sinai Medical Center, where he later died.

Rosen said Beverly Hills detectives found no signs of foul play and believe his death is medically related. He said Heavy D “was returning home from shopping. He experienced difficulty breathing while walking into his condominium building. He was being assisted up to his apartment by building personnel when he collapsed in an exterior hallway.”

Dwight Arrington Myers, the rapper known as Heavy D of Heavy D and the Boyz, and his crew released their debut album “Living Large” in 1987. Their hits included “Now That We Found Love,” “Who’s the Man” and “Somebody For Me.”

The New York-born rapper was one of the genre’s most integral stars in the late 1980s and early 1990s, as it relied on new voices and star power to fuel its phenomenal growth in the mainstream.

The deep-voiced rapper’s earliest hit, “The Overweight Lover’s in the House,” played up his hefty frame. But while that nickname would stick, his weight did not become part of his routine, like the Fat Boys. What drew people to his music was his singular style, which celebrated an easygoing, party vibe ― sometimes humorous, sometimes inspiring and almost always positive.

“Most know Heavy D as a rap icon,” said actor-comedian Tommy Davidson. “I considered him a brother who made an indelible mark on me as a performer and a human being. I miss him already.”

In the mid-1990s, Heavy D became president of Uptown Records, the label that released most of his albums and was also the home to acts like Mary J. Blige and Jodeci. He also created the theme songs for the TV sketch comedy shows “In Living Color” and “MADtv” and acted on the TV shows “Boston Public” and “The Tracy Morgan Show,” as well as in the films “Life” and “Step Up.”

“I feel sick,’’ tweeted rapper and “Law & Order” actor Ice T. “Everyone should stop for a second, take a breath and realize how lucky you are to be alive, then appreciate every second with your luv ones.”