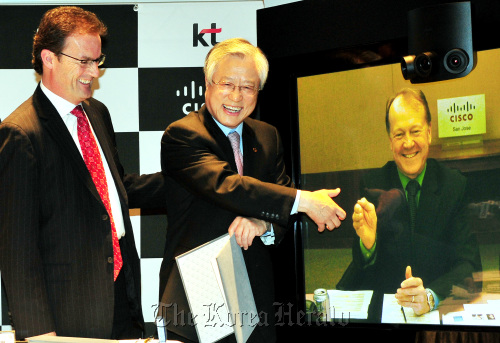 KT chairman Lee Suk-chae (center) and Cisco Systems CEO John Chambers gesture to shake hands through a telepresence in Seoul on Tuesday after signing an MOU on cooperation in smart technologies. (Park Hyun-koo/The Korea Herald)
KT Corp. said Tuesday it would enter the global smart space market by establishing a new joint venture called the KC Smart Service together with Cisco Systems in next January.

The new firm, which will take off with $30 million in initial funding, will merge KT’s telecommunications infrastructure and software solutions with Cisco’s information technology equipment and solutions, according to KT officials.

The new venture will provide consulting services in the beginning stage of the construction of a certain building, such as a shopping mall, enabling customers to get efficient services and add value to the space. As an exemplary case, customers will be able to receive quick information on where to park and get more information on that day’s coupons and event items through the use of smart devices, said a KT official.

Starting with 30 employees, the company is expected to recruit up to 70 employees by the end of next year. It aims at recording over 100 billion won in yearly sales beginning in 2014 and is projected to record around 2 trillion won in accumulated sales by 2021.

The initial target countries for the project will be the 14 nations in the Asian Pacific region ― including China, Japan, New Zealand, Singapore, Sri Lanka and Thailand.

KT will be in charge of the company’s overall business operations, such as naming the new chief executive, and it will be based in Korea.

“The joint cooperation with Cisco is the first step to ‘go beyond’ as a local telecommunications firm and reach out globally as a smart firm,” said KT chairman Lee Suk-chae.

Lee has emphasized over the past that KT needs to go beyond serving its mere role as a telecom focusing on the already-saturated local market by nurturing future growth engines.