Though the company is pinning its hopes on the Malibu to grab more than 10 percent of the Korean market, data showed that the sedan fell behind the similar sedans from major competitors in terms of fuel efficiency, engine performance and price competitiveness.

According to each company’s data for sales at dealerships, the gasoline-fueled Malibu with an engine capacity of 2.0 liters posted the lowest fuel efficiency of 12.4 kilometers per liter among the four major sedans.

The three other popular sedans with the same engine capacity ― the Sonata of Hyundai Motor, the K5 of Kia Motors and the SM5 of Renault Samsung Motors ― have the same efficiency of 13 kilometers per liter.

As many Korean households have been struggling with high gas prices, GM Korea dealerships are bound to be asked about fuel efficiency by customers.

The Malibu was not an exception in the evaluation by many local customers that cars produced by U.S. automakers have low fuel efficiency. 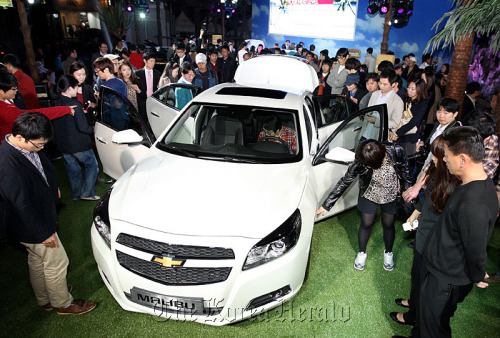 While the three competitors recorded a maximum torque of 20.2 kilogram-meters, the Malibu could muster 18.8.

Yet, the prices of the Malibu are higher than those of the three competitors.

The price tag of the Malibu 2.4 model comes to 31.72 million won while the maximum price of the three sedans’ turbo-engine models is 29.6 million won.

In August, GM Korea CEO Mike Arcamone stressed that the automaker could see “double-digit market share” in Korea at the end of this year during a news conference.

“(The Malibu) will enable us to achieve a more solid brand stance and bolster our sales,” he said.