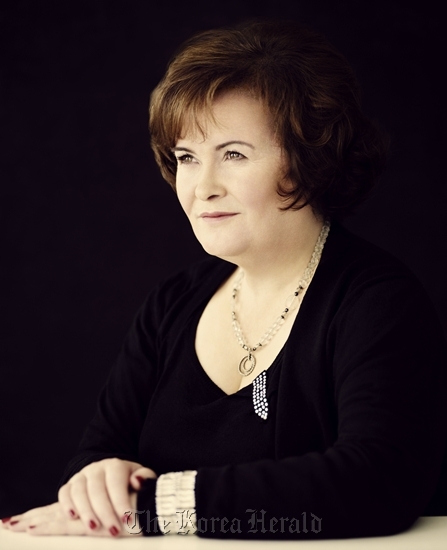 The 10-track album features songs written by different musicians, such as “You Have To Be There” by ABBA’s Benny Andersson and Bjorn Ulvaeus, and “Both Sides Now” by Joni Mitchell.

“Well, I try to add a bit of a variety to my songs. Otherwise people are going to get bored and stop listening,” Boyle said in an e-mail interview with The Korea Herald.

“You’ve go to express yourself. You don’t want people falling asleep midway through the songs.”

The 50-year-old singer went on to say the latest album reflects “sadness, happiness and immense bravery” of people who wrote her the most personal letters from around the globe.

“People, most of whom I have never met, have sent me the most beautiful letters. I’m moved by so many ― especially as they reveal their innermost feelings,” she said.

Since she shot to stardom through reality TV show “Britain’s Got Talent” in 2009, Boyle has achieved many things. Her first two albums ― 2009’s “I Dreamed a Dream” and last year’s “The Gift” ― sold a combined 14 million copies. There will be a book, a TV special and a musical about her life.

“I think if you analyze it all, it’s very frightening what I’ve achieved, in a good way. But it’s hard to take it all in,” she said.

The musical is to start in theaters in the U.K. in March, mostly dealing with her family and the story behind her “Britain’s Got Talent” moment.

Boyle said her mother influenced her life the most and said the song “Autumn Leaves” on the new album reminds her of the death of her mother five years ago.

“It’s about missing someone, but you don’t realize that at the time because you are too busy focusing on other things until they are gone and you are left with a big hole in your world,” she said.

Boyle said her life mission is to become better as a singer and give struggling artists a chance to achieve their dreams.