FRANKFURT, Germany ― Hyundai Motor and its affiliate Kia Motors overtook Toyota Motor in their combined sales in the European market in 2010.

The Korean carmakers’ aggressive sales marketing may catapult them to the level of Volkswagen and BMW in Europe. But the Hyundai Motor Group turned its eyes from market share to quality control. 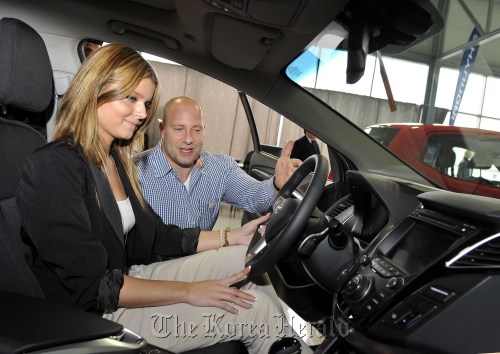 A Hyundai Motor dealership owner (right) introduces the i40 sedan to a consumer at the carmaker’s showroom in the outskirts of Frankfurt, Germany, on Tuesday. (Hyundai Motor Co.)
Kim, who also holds the post of a managing director at Hyundai-Kia Group, said he is certain that Kia will also be able to overtake Toyota in sales in the coming years.

But he stressed that the automakers plan to prioritize minimizing risks ― particularly in terms of trade conflicts ― by refraining from rapid expansion.

In the past, they compared Hyundai-Kia with Suzuki or Mitsubishi. Recently, a German automobile magazine carried an article comparing the Korean companies’ cars with those of Volkswagen and Ford Motor.

“Under the assumption that we overtake Fiat (through aggressive marketing), for example, Italy will not sit idly by,” he said.

He raised the possibility that a European country will invoke “safeguard” measures against rapid sales growth of Hyundai-Kia under an accord of the Korea-EU Free Trade Agreement.

A safeguard arrangement between the two parties allows a country to temporarily raise duties or restrict imports when there is a significant surge in car imports.

Concerning the possibly contradictory goal between overtaking Toyota and cautious stance, he said the European operation will be faithful to “sustainable growth,” a recent guideline set by Hyundai Motor Group chairman Chung Mong-koo.

“Toyota has been in trouble in the aftermath of its aggressive sales aimed at becoming the world’s No. 1,” he said. “Now we are focusing on qualitative growth than quantitative one.”

The market share and sales ranking will ultimately increase if the two companies will take gradual steps via enhancing quality in overall sectors, he said.

For the sustainable growth, he said, Hyundai-Kia’s overseas operations are considering pushing for productivity rather than establishing additional factories.

According to Kia executives including Kim, launch timing of the K5 sedan in Europe has been delayed to the first quarter of 2012 from the fourth quarter of 2011.

Mentioning intra-group rivalry between the two affiliated companies, he added that Hyundai could be one of the key competitors of Kia in Europe.

Hyundai and Kia have been seeking to improve their brand awareness and image especially in the big five markets ― Germany, Britain, France, Italy and Spain.

While the big five account for about 75 percent of the European automobile market, Hyundai-Kia’s market share in those countries is relatively small compared to other European countries such as the Netherlands and Belgium.

Hans-Peter Goeres, an owner of a Hyundai Motor dealership, located in the outskirts of Frankfurt, Germany, said Hyundai’s brand image has been upgraded among middle-income consumers.

He started selling Japanese cars in the 1980s and engaged in sales of Mazda and Hyundai over the past 10 years.

The dealer, who scrapped sales of Mazda last year, said he thought highly of Hyundai’s corporate philosophy and growth potential.

“(Compared to 10 years ago,) more customers with higher income are visiting here. That is attributable to diversified Hyundai car models,” he said.

He predicted that the i40, a European-style premium sedan, and a revamped version of its i30 hatchback will draw wide interest among the middle-income bracket among Germans and other Europeans.